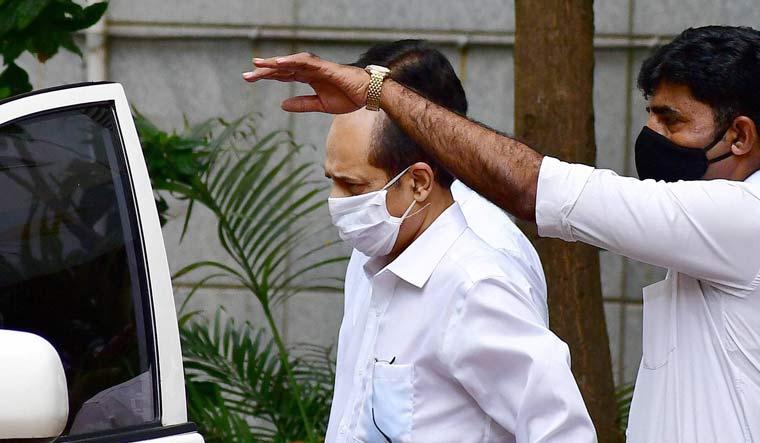 In his hand-written letter, Vaze claimed that NCP president Sharad Pawar was against his reinstatement into Mumbai Police in 2020, but Deshmukh assured him that he would convince the party chief. NCP is a key constituent in the MVA government.

"The home minister (Deshmukh) told me that he will convince Pawar saheb and for that purpose, he asked me to pay Rs 2 crore. I had expressed my inability to pay such an amount. On this, the home minister asked me to pay it in a later course," Vaze wrote in the letter which he tried to submit before a special NIA court in Mumbai.

However, special judge PR Sitre refused to take his letter on record and asked him to follow the required procedure.

Vaze said in October 2020, Deshmukh called him to the 'Sahyadri Guest' House and asked him to collect money from 1,650 bars and restaurants in Mumbai. Earlier, former Mumbai police commissioner Param Bir Singh, too, had raised a similar allegation against Deshmukh in a letter to Chief Minister Uddhav Thackeray.

Vaze said Deshmukh raised the same demand again in January 2021 when they met at the minister's official residence. “The home minister told me that there are approximately 1,650 bars and restaurants in Mumbai and told me to collect Rs 3 to 3.5 lakh from each of these for him,” he said.

“In the month of July/August 2020, I was called by honourable minister Anil Parab at his official bungalow,” he said, adding that Parab told him to look into the SBUT inquiry, which was in its priliminary stage, and bring the trustees of SBUT to him for a ‘negotiation’ on the inquiry.

“He (Parab) also insisted to initiate primary talks to get Rs 50 crores from SBUT in order to close the said enquiry. I had expressed my inability to do any such thing as I do not know anybody from SBUT and also I did not have any control over the inquiry," Vaze said.

The suspended cop further alleged that in January 2021, Parab asked him to look into an inquiry against "fraudulent" contractors listed in the BMC and collectat least Rs 2 crore from about 50 such contractors.

The said inquiry was based on an anonymous complaint, Vaze added.

Parab, however, rejected the allegations, saying they were incorrect and aimed at maligning his image, and expressed readiness to face any probe.

Vaze was arrested by the NIA on March 3 in the case of an explosives-laden SUV found near industrialist Mukesh Ambani's residence and the death of businessman Mansukh Hiran.