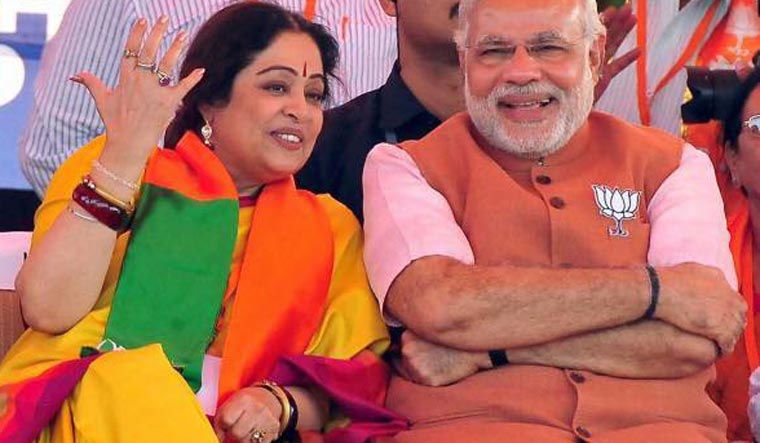 The head of the BJP's Chandigarh unit announced on Wednesday that actor-turned-politician Kirron Kher, the Union territory's MP, was suffering from a form of blood cancer.

Kirron Kher, who joined the BJP in 2009, has represented Chandigarh in the Lok Sabha since 2014. Kirron Kher is the wife of popular actor Anupam Kher.

Arun Sood, the president of the BJP unit in Chandigarh, convened a special press conference on Wednesday amid continuing criticism by the Congress that Kirron Kher had been "missing" from the constituency since December.

Sood was quoted by Hindustan Times as saying, “She [Kirron Kher] had suffered a broken left arm at her Chandigarh house on November 11 last year. After her medical tests at Post Graduate Institute of Medical Education and Research (PGIMER) in Chandigarh, she was diagnosed with multiple myeloma. The disease had spread to her left arm and right shoulder. For treatment, she had to go to Mumbai on December 4."

Multiple myeloma is a cancer that occurs when abnormal plasma cells develop in the bone marrow.

She was being treated at the Kokilaben Hospital. Sood added the disease had receded from Kirron Kher's arm and shoulder and she was no longer hospitalised. However, she needed to make regular hospital visits for treatment.

The Congress had complained Kirron Kher had been missing from her constituency amid the continuing pandemic.

"Congress councillor Satish Kainth had yesterday (Tuesday), in a symbolic protest, held a torch in his hand and started looking for the MP in the city. A video was released in this regard. Kainth did so in response to a protest by the BJP members wherein they looked for him in his ward. Today, Deepa Dubey, city Mahila Congress chief, held a telescope in her hand and searched for Kher," The Tribune reported on Wednesday.

Sood defended her continued absence from Chandigarh. “She was in the city till December last year. She is a senior citizen and diabetic. She was advised against venturing outside the house during the lockdown. Only to get treatment for the disease, she had left the city. Despite her illness, Kher has been in regular touch with me discussing various city-related issues," Sood was quoted as saying by Hindustan Times.

Sood hit out at the Congress over what he described was "petty politics". Sood claimed Congress leaders knew of Kirron Kher's health issues, but were still criticising her.