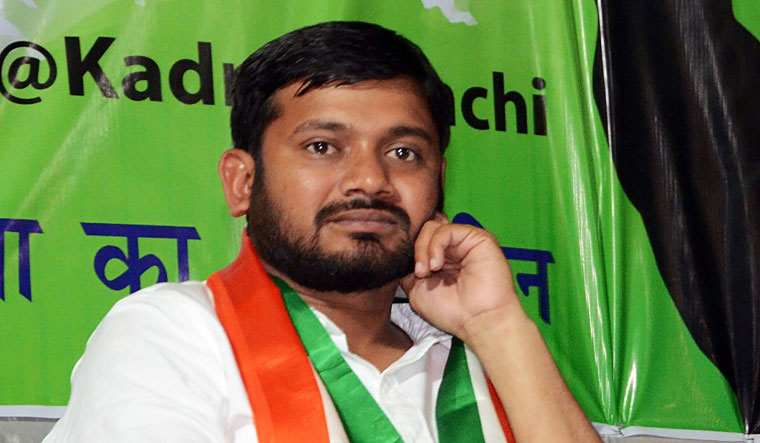 The former JNU students union president termed Modi's statement in Bangladesh, where he is on a visit, about going to jail for that country's freedom as a "big lie".

He urged the people of Assam, where the three-phase poll for the state assembly began on Saturday, not to support those who are selling the resources of the country in the name of nationalism.

Launching a scathing attack on Modi, the Left youth leader questioned whether annually two crore jobs have been created or black money has returned to the country as was promised by him in 2014.

"What has happened in five years? How are the same people seeking votes again? When I came here someone said that I can be a challenge to Modi. I said that to challenge Modi one has to be the biggest liar of the world."

Referring to Modi's comment in Dhaka, Kumar said, "Have you heard what has he (Modi) said in Bangladesh? He said he had also contributed in Bangladesh's freedom struggle, that he had participated in satyagraha and went to jail... Only BJP leaders can create such level of lies," Kumar said.

In the Bangladesh war, India supported the freedom movement in that country and Pakistan opposed it. "So, a question arises that where was Modi on his satyagraha ?

"Was he put behind the bars by the Pakistan government or the Indian government? It is nothing but a big lie," Kumar said while campaigning for CPI candidate Munin Mahanta.

Modi had said in Dhaka on Friday that he was part of a satyagraha held to back the liberation of Bangladesh. It had led to political slugfest back home.

He was speaking at the national parade square in the Bangladesh capital to mark the celebrations of the golden jubilee of its Independence and the birth centenary of the father of the nation, Sheikh Mujibur Rahman.

Training his guns at Sarma, Kumar said "There is one leader who calls himself Mama (maternal uncle). Kansa was also a mama (of Lord Krishna). You can see the political truth. I just want to know how many promises which were made five years ago have been fulfilled."

Sarma, who is also the Assam health minister, is fondly called 'Mama' mostly by youths for his handling of the COVID-19 situation in the state in 2020. During the campaign phase, he is widely being addressed as 'Mama'.

"The man who could not be Mama of Congress party, how can he be a Mama of Assam? There is not a bigger traitor than the one who cheats people for his own interests," Kumar said.

Sarma was a minister in the Congress government of Tarun Gogoi in the state till he quit the party and joined BJP.

Criticising BJP, the CPI leader said, "Traitors have occupied Delhi. We have to defeat them and make our farmers who are protesting on the borders of Delhi (against farm laws) for months, victorious," Kumar said.

The ongoing state election is not being held to chose any leader but the government which will work for the people, he said.

"Gandhi took bullets in his chest for the ballot. This is the power of ballot, don't misuse it. You have to decide whether you are with the force which is selling the resources of the country in the name of nationalism.

"Let love win this election, not hatred. Gandhi was a man of love," he said.

Alleging that the BJP government is deeply involved in syndicates of coal, fish and other items, the former student leader said the saffron party only makes false promises every five years.

"This party cannot do good for Assam. Modi is selling the country to his Gujarati friends. You have to understand the conspiracy of these people. They want to build a syndicate by creating fights among the people in Assam.

"They are enacting dramas in Assam. They say that if the Mahajot (Congress-AIUDF alliance) wins, then the social fabric of Assam will change. They don't know the history of Assam. They should know that this land belongs to Srimanta Sankardeva and Aajaan Fakir," he added.