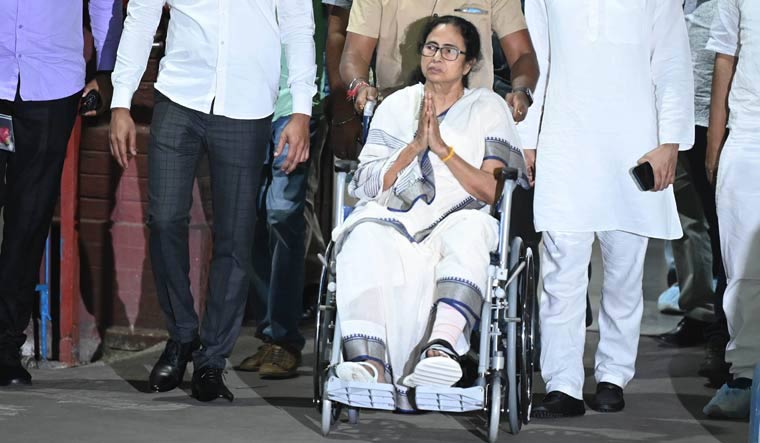 Days after suffering a leg injury during the ongoing election campaigns, West Bengal Chief Minister Mamata Banerjee will today hold a Kolkata roadshow in a wheelchair. 66-year-old Banerjee fell and suffered severe injuries in her left ankle and foot and right shoulder, forearm and neck after she was allegedly pushed by 4-5 unidentified persons during her campaigning in Nandigram seat, from where she is contesting in this assembly election. She was rushed to SSKM Hospital in Kolkata from Purba Medinipur district through a green corridor and was kept under observation for 48 hours.

The incident in Nandigram which caused injury to West Bengal Chief Minister Mamata Banerjee was an accident and not a planned attack, according to the report of two poll observers submitted to the EC on Saturday. The incident had taken place "suddenly" though a "conspiracy theory" was spoken about, the report prepared by special observer Ajay Nayak and special police observer Vivek Dubey to West Bengal for the state election stated, news agency PTI had reported. The report also said Banerjee was injured due to the suddenness of the incident. "The incident was not a planned attack but an accident. It had taken place suddenly."

Following the Nandigram incident, state ADG (Law and Order) and nodal officer Jagmohan on Saturday directed all district administrations to arrange for the strictest security measures for the chief minister during her tours for campaigning in the districts for the eight-phase poll beginning on March 27.

The EC had sought reports from the state government as well as the two observers on the incident. The state administration had submitted its report on Friday. Election to the 294 assembly seats in West Bengal will be held between March 27 and April 29. Votes will be counted on May 2.