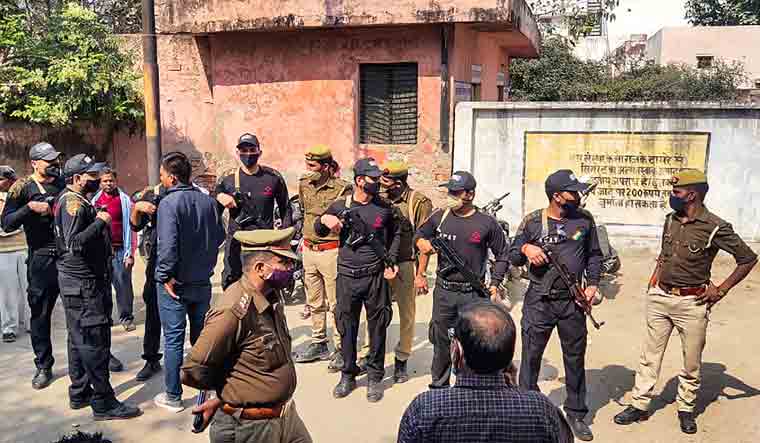 Amid growing outrage after three Dalit girls, all minors, were found poisoned in a field in Unnao, Uttar Pradesh, police there have filed FIRs against eight Twitter handles, including that of Mojo Story run by Barkha Dutt, accusing them of spreading false information about the case.

The Unnao police accuse the eight Twitter handles of spreading “fake” stories claiming that the girls were raped and that their last rites had been performed without their parents’ consent—similar to what was reported during the Hathras rape case last year. Police deny both these claims, saying the post-mortem of the bodies showed no signs of rape and that the last rites had been performed with the parents’ permission.

Unnao SP Anand Kulkarni has also said further action would be taken including an FIR under the same sections against Congress leader Udit Raj for a tweet after the police take a legal opinion, the Hindu reported. In a video shared by the Unnao Police, Kulkarni said untrue information was being spread about the case.

An FIR has also been filed a day earlier against Udit Raj over a "misleading" tweet that made the same claims.

On the behest of CM Yogiji,Unnoa Police registered the case against me for speaking the truths about the mysterious deaths of Dalit girls.Their parents have stated that it was a case of sexual assault and cremation was also done against their wishes. @INCIndia @INCUttarPradesh

Responding to the FIRs, Mojo Stories in a statement have called this a “blatant case of harassment and intimidation”, saying a local stringer sent them the initial inputs from their story, followed by a Delhi correspondent who covered it on the ground.

In response to @unnaopolice FIR for our reportage of the Unnao murders-this is a blatant case of harassment and intimidation. Arun Agarwal, a local stringer sent us initial inputs, later we had a Delhi correspondent on ground, as well.

“We have reported all dimensions of the tragedy, the family's anxieties and allegations as well as the police response at every step. And if this case is pursued, we will confidently defend our journalistic rights and freedom in court,” Mojo said in a tweet.

The update on this : just when you thought it couldn't get any more shocking the Unnao Police has refused to even give us a copy of the FIR in total violation of my legal rights, and without which we cannot appeal for judicial intervention. Brazen Harassment and bullying.

Mojo editor Barkha Dutt has also stated her intent to challenge the FIRs in court, saying they were not given a copy of the FIR either.

Citing the confession of the primary accused, the Unnao police said the three girls, who were found unconscious and apparently poisoned in a field near Unnao, were poisoned by a man from a neighbouring village who said he was “in one-sided love” with one of the victims. When she refused to give him her phone number, he poisoned her with pesticide-laced water, which he also gave to the other two girls who arrived later, the police said. Two of the girls were brought dead to hospital, while the third remains in critical condition.

The only survivor, the target of the man’s murder attempt, remains in critical condition in Kanpur hospital. Both the accused, and the reported minor he was with (later said to have been an adult as per Aadhaar data), have been detained and sent to 14 days of judicial custody.

In the aftermath of the Hathras rape incident, the Uttar Pradesh police arrested Siddiqui Kappan, a Delhi-based journalist who works for Malayalam news portal Azhimukham and was travelling to Hathras to report on the gang rape of a Dalit girl, and booked him under Section 17 of the Unlawful Activities (Prevention) Act.

Arrested in October 2020, Kappan was granted interim bail last week for five days to meet his ailing 90-year-old mother. The Supreme Court barred him from giving interviews to any media, including social media, during his visit.