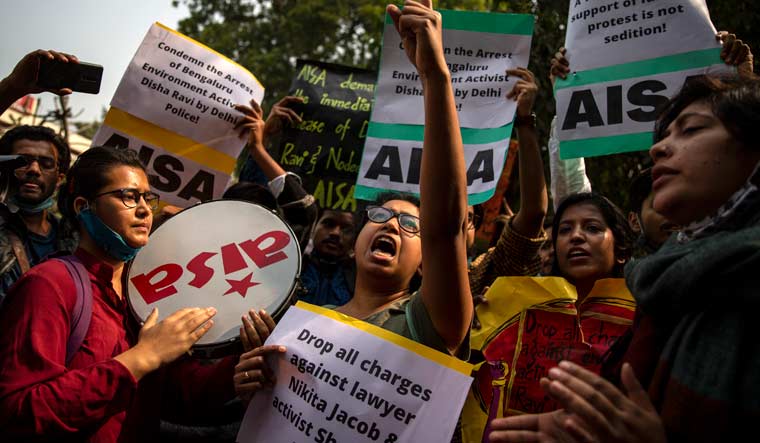 The Bombay High Court, considering the transit anticipatory bail application of Nikita Jacob, granted her transit bail for three weeks. Jacob, a suspect in a case registered by Delhi police in connection with the 'toolkit' shared by climate activist Greta Thunberg over the ongoing farmers' protest, had approached the Bombay HC.

A Delhi court had earlier issued a non-bailable warrant against Jacob and another accused in the case. According to Delhi police, the duo was allegedly involved in preparing the document and was in direct touch with "pro-Khalistani elements".

Jacob's plea seeking urgent hearing was mentioned before the Bombay High Court's single bench of Justice P.D. Naik on Monday. The high court said it would hear the plea on Tuesday. Jacob in her plea sought transit anticipatory bail for a period of four weeks so that she can approach the court concerned in Delhi to apply for pre-arrest bail.

The advocate in her plea said she is unaware whether she is named as an accused or witness in the case. "However, the applicant [Jacob] fears that she may be arrested due to political vendetta and media trial," her application said. It further said the FIR registered in the case was "false and baseless" and Jacob has already cooperated with the cyber cell of the Delhi police and recorded her statement.

"Some entity named Legal Rights Observatory appears to have filed a false and baseless complaint with the Delhi police and seeks to pin the blame for violence on January 26, 2021 upon the applicant as well," the plea said.