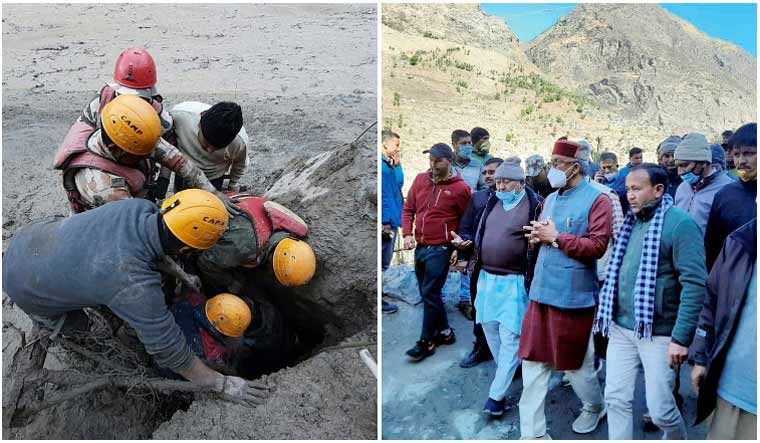 Uttarakhand CM Trivendra Singh Rawat confirmed to PTI that seven bodies have been recovered but at least 125 are still missing, after avalanche triggered by a glacier burst in Chamoli wrecked havoc in Tapovan and Raini.

Rawat, who rushed to the affected areas to take stock of the situation on the ground, said relief and rescue operations are being carried out on a war footing.

A part of the Nanda Devi glacier broke off at Joshimath in Chamoli on Sunday, leading to a massive flood in the Dhauli Ganga river and causing large-scale devastation in the upper reaches of the ecologically fragile Himalayas.

Over 150 labourers working at a power project in Tapovan-Raini are feared dead.

The Army has deployed four columns and two medical teams for the rescue of people feared trapped in the debris. One Engineering Task Force (ETF) of the Army was also deployed in Ringi village in Joshimath. Apart from the ETF with two JCBs, an Army medical team of over 100 personnel with two ambulances have been deployed for the rescue mission. Officials said the Indian Air Force has operated C-130 and AN32 transport aircraft to airlift personnel from National Disaster Response Force (NDRF) to the affected areas. Two Cheetah helicopters have been deplyed, too.

PM Modi, while addressing a public rally in West Bengal, said he is in constant touch with the chief minister of Uttarakhand, and is keeping track of the situation.

Defence Minister Rajnath Singh, too, tweeted his condolences. "The loss of precious lives due to the glacier burst in Chamoli is deeply painful. My thoughts are with the bereaved families. Two helicopters from the Armed Forces have been moved from Bareilly to Joshimath for rescue and relief operations." tweeted.

Two teams of the NDRF have been sent and three additional teams have been flown in from Hindon airport in Ghaziabad. The troops will reach the affected region tonight. More than 200 ITBP personnel are on the spot. The Indian Navy divers are being flown in and aircraft and helicopters of the Indian Air Force (IAF) are on standby, the spokesperson said.