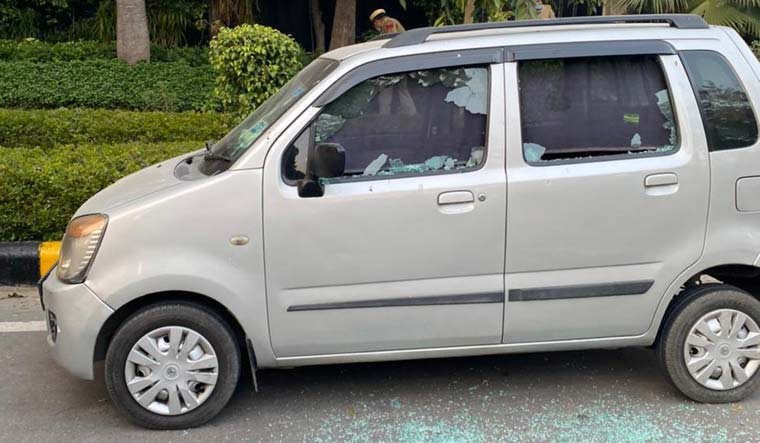 A team of Delhi Police's Special Cell on Saturday morning visited the spot near the Israeli Embassy where an IED blast took place on Friday, officials said.

The Special Cell is probing the blast that occurred on Friday evening in the heart of the national capital and collecting evidence as part of the investigation, they said.

ANI reported that the Special Cell has obtained CCTV footage showing a cab dropping off two persons who were seen walking towards the spot near the Israeli Embassy where the explosion occurred. The driver had been contacted and sketches were being prepared. A probe is under way to ascertain their role.

Police told mediapersons the explosive was likely planted in a flowerpot on the road.

An envelope addressed to the Israeli Embassy and containing a note was found at the site of the blast, sources had said on Friday. They said the envelope was addressed to embassy officials. Multiple media reports claimed the note referred to the assassinations of two key Iranian figures—Revolutionary Guard general Qasem Soleimani and nuclear scientist Dr Mohsen Fakhrizadeh—in 2020. Soleimani was killed in a US drone attack when he was visiting Iraq in January 2020, while Fakhrizadeh was assassinated in Iran in November. Iran had vowed revenge against the US over the killing of Soleimani. Tehran had accused Israel of being behind the killing of Fakhrizadeh.

The Delhi Police said that the IED went off at 5.05pm and no one was injured and there was no damage to any property.

The blast took place when President Ram Nath Kovind, Vice President M. Venkaiah Naidu and Prime Minister Narendra Modi were present a few kilometres away at the Beating Retreat ceremony at the culmination of the Republic Day celebrations.