Three arrested in connection with Muradnagar tragedy in UP 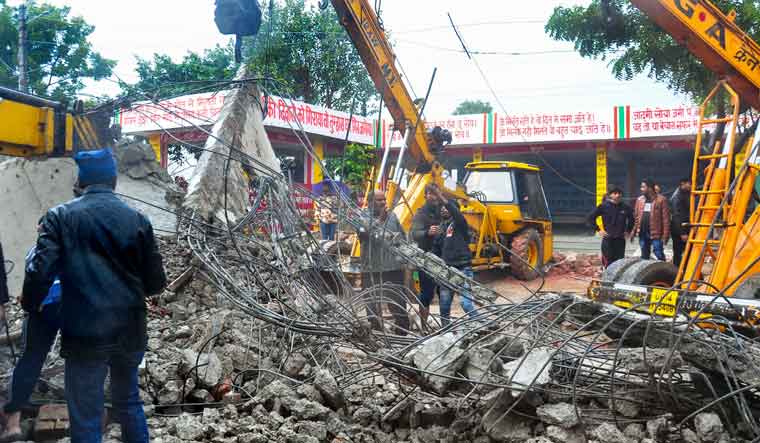 Rescue operation carried out by NDRF personnel after the complex roof of a crematorium collapsed due to heavy rain, at Muradnagar in Ghaziabad on Sunday | PTI

Three people have been arrested in connection with the accident which has left at least 25 people dead at Muradnagar in Uttar Pradesh. Those arrested include Muradnagar Municipal Corporation executive officer Niharika Singh, junior engineer Chandrapal Singh, and a supervisor named Ashish. The contractor of the project, Ajay Tyagi, is on the run.

On Sunday, the roof of a shelter at a cremation ground came down, trapping almost 100 people who were there for the cremation of a resident of the town’s Dayanand Colony. The building was not old, but its poor construction is believed to have been the reason behind the collapse. It was raining on Sunday when the mishap occurred. The water logging in the area is believed to also have contributed to weakening of the structure and its collapse.

A police case has been filed against those arrested and others on charges of culpable homicide, corruption and wilful negligence. The FIR was registered by the son of one of the deceased.

SP (Rural) Iraj Raza said, “We are making all efforts to nab the other accused”.

The three who have been arrested are believed to have played a role in awarding the contract for the reconstruction of the crematorium and building the structure in which the tragedy happened. The project was completed within a couple of months leading to speculation about its technical soundness.

Meanwhile, labelling the accident an “example of the prevailing corruption in the state government", the Akhil Bharatiya Hindu Mahasabha has called for raising the compensation given to the family of the deceased. The outfit’s president Chakrapani Maharaj said, “This is a shameful accident. The government should give the bereaved families Rs 2 crore each instead of Rs 2 lakhs," he said.

It is not clear if the number of those present at the cremation ground was in keeping with COVID-19 protocols that prohibit large gatherings.