I was on the brink of quitting studies due to my poor English: Sudha Murthy

Murthy shared with students some inspiring experiences from her life 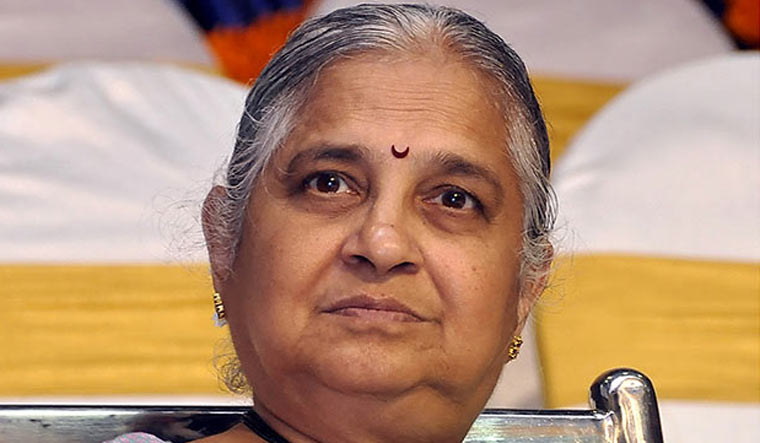 Philanthropist and chairperson of Infosys Foundation Sudha Murthy interacted with students of Delhi government schools on Wednesday, sharing some inspiring experiences from her own life, including her struggles as a student who knew little English and was on the verge of quitting studies because of the linguistic debacle and how she was the only girl in a class of 149 in the engineering college.

Murthy, who met the students in a live ententrepreneurship interaction session as part of the Entrepreneurship Mindset Curriculum of the Delhi government schools, shared that she was born in a small village in Karnataka and studied in a Kannada medium school until Class 10.

She said she wanted to become an engineer, but she did not feel confident about carrying on with the course because of her weak command over English and was on the brink of quitting her studies.

Her mother, she said, encouraged her to focus on improving her English language skills. She then decided to work on her English by reading newspapers, and eventually became a successful engineer.

“I was the only girl among 149 students in our class, and there was no separate toilet for girls. Everyone used to make fun of me, that if a girl is in the class, how will they (the boys) learn engineering. But I did not miss a single day in four years,” Murthy said. She wanted to show that engineering was not just for boys and even ranked first in her class.

Murthy, who has also made a name as an author writing in English and Kannada, advised the students to follow mind over heart, and to exercise self-control while engaging in leisure activities like playing computer games, or consuming junk food. She also asked the students to learn, and be equally fluent in their mother tongue and English, the universal language of communication.

Murthy said that her mother, who was a teacher, encouraged her to write a page in her diary every day, and that instilled the habit of writing and following discipline in her.

“Compete with yourself every day. If yesterday you learnt ten words, then today try to learn 15 words. Keep pushing yourself to do better,” she said.