AIADMK is at a crossroads, still fighting hard to find a charismatic leader 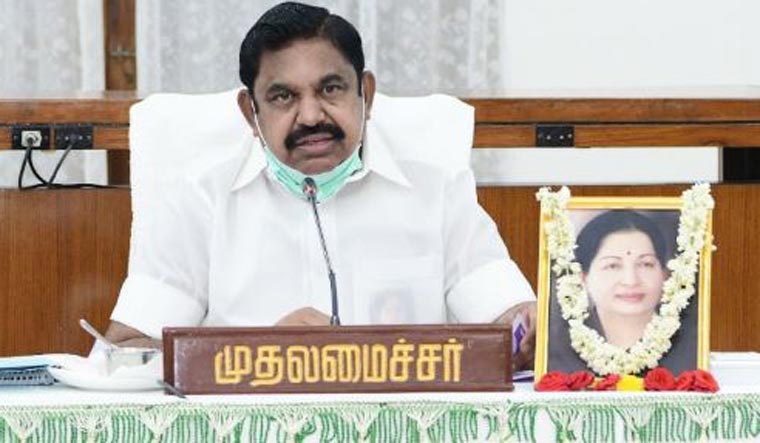 Tamil Nadu CM Edappadi K. Palaniswami, with a photograph of Jayalalithaa by his side | Official Facebook account

On Thursday, as Rajinikanth was declaring the date for his political party's launch at his Raghavendra Avenue residence in Chennai, the swanky Poes Garden locality had turned politically active after almost four years.

After the press conference and after hearing all the cracker sounds, as this correspondent walked down the lane, the memories of the early days of my reporting career began running in my thoughts. And my conscience automatically led me to the road off Raghavendra Avenue, which was once the nerve centre of Tamil Nadu politics. As I walked down the lane, passing the then Jaya TV office premises and Veda Nilayam, the residence of former chief minister Jayalalithaa Jayaram, I was recalling the days when I used to follow her in her convoy, witnessing her party men queueing up and prostrating before her.

An eerie silence prevails. The huge iron gates of Veda Nilayam remain closed. Once the seat of power, the white mansion is waiting to be turned into a memorial. And four years after her death, the AIADMK is going through an upheaval with much internal churning. In 1972, when MGR launched the party, he carefully crafted the future, ensuring that the movement remains together even three decades after his death. Except for a few years in the late 1980s when his health snatched away his life, the party saw ups and downs for two years. But Jayalalithaa emerged from his shadows as the supremo of the party. Though there were a few defections in 1989, 1996 and 1999, Jayalalithaa largely kept the flock together and was looked at as the harbinger of hope of the AIADMK. She proved to be the most charismatic leader of the state, even bigger than MGR, her own mentor.

But four years after her death, the AIADMK is at a crossroads, still fighting hard to find a charismatic leader to fill in the space held by its ‘Amma.’ AIADMK party coordinator O. Panneerselvam and deputy coordinator Chief Minister Edappadi K. Palaniswami issued a joint statement on Thursday to energise the cadres, before the fourth death anniversary of their beloved Amma. However, the duo seems to have demolished the legendary foundation laid to the party by MGR and Jayalalithaa’s charisma in just four years. While on the face of it, Palaniswami and Panneerselvam resolved the tussle among themselves, the two are yet to emerge as leaders who could be widely accepted by the people of the state, beyond the party functionaries.

While Palaniswami is trying to cultivate his own charisma to retain the reigns of the party, Panneerselvam too has been fighting tough to assert his supremacy over the former. For a party, which after the 2004 Lok Sabha polls drubbing, decided not to align with the BJP or the Hindutva forces in the state, the alliance in the 2019 Lok Sabha polls and a decision to go with the BJP once again in 2021 Assembly polls have brought in much unease among the cadres.

And both Palaniswami and Panneerselvam going all the way to confirm the alliance with the BJP in the presence of Union Home Minister Amit Shah at a government event has only distressed the AIADMK cadres at large. While Amit Shah remained silent on the alliance, except for appreciating the Tamil Nadu government’s performance, the AIADMK seems to be looking for star power to continue to be in power.

On Thursday, when Rajinikanth announced that he will launch his political party soon, Panneerselvam went all the way to say that his party will align with the actor’s party if required. A day later, Palaniswami chose to be more circumspect, saying, “Let him [Rajinikanth] launch his party. Then we will see.”

While Palaniswami doesn’t look for a helping hand from an actor like Rajinikanth, he will have to go a long way to claim Jayalalithaa’s legacy. Apparently for a man who had asserted himself in the past three years, only to be known as the face of the AIADMK, sources in the party say he might be able to emerge out as a leader like Jayalalithaa—who chose to go it alone in 2016 Assembly elections—just to be known as the indisputable leader of the single-largest party. And yes, Palaniswami is still waiting for the BJP to confirm the alliance to contest the 2021 Assembly polls.

And on her fourth death anniversary on Saturday, Palaniswami will have to fight the forces within his own party and also Jayalalithaa's legendary image just to catapult himself as a leader, above a superstar like Rajinikanth. And of course, Palaniswami emerging out will prove that the crowd that had gathered for Rajinikanth in Poes Garden was not even a fraction of the crowd that once used to throng the streets of Poes Garden for his Amma.