EPS and OPS announced the continuation of the alliance, in presence of Amit Shah 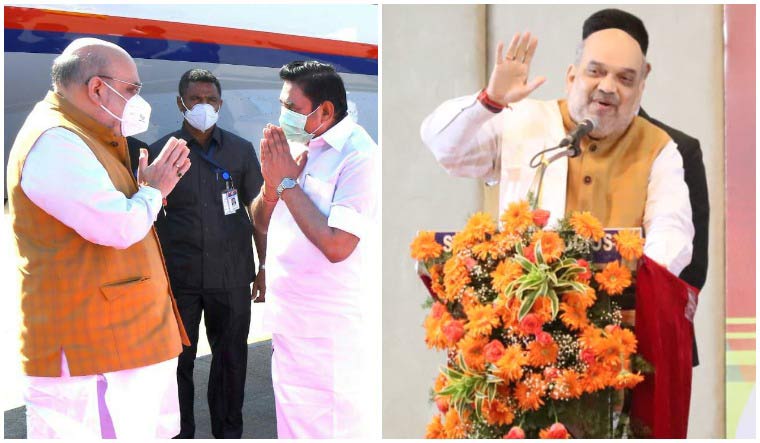 The ruling AIADMK on Saturday announced that its electoral alliance with the BJP will continue for the assembly polls in April 2021. Chief Minister Edappadi K. Palaniswami (EPS) and Deputy Chief Minister O. Panneerselvam (OPS) made the announcement.

Speaking during an event organised by the state government where Union Home Minister Amit Shah inaugurated schemes worth over Rs 67,000 crore, the CM and his deputy said that the AIADMK-BJP alliance is intact. Shah, in turn, read a long list of appreciation for the Tamil Nadu government led by EPS. The announcement and appreciation come at a time when the BJP leaders in Tamil Nadu have been accusing the ruling AIADMK for not allowing their Vel Yatra and also the recent Ganesh Chathurthi processions. The speculations of a split which had arisen because of these issues, were thus put to rest today.

Though Shah did not say so in words, he acknowledged the continuity of the alliance by saying that the Narendra Modi government at the Centre will stand “rock solid” with the AIADMK government. He hinted at the possible major issues that the AIADMK-BJP alliance could take up during the poll campaign when he talked of ending dynasty politics, apparently referring to the DMK-Congress alliance, and the 2G scam.

Both EPS and OPS heaped praises on Shah. While OPS called him the “modern-day Chanakya”, EPS referred to Modi and Shah as the duo who have enhanced India’s image in the eyes of the world. “I am duty bound to announce that the AIADMK-BJP alliance will continue in the future elections,” OPS said. Earlier, it was AIADMK spokesperson and senior minister D. Jayakumar, who accompanied Shah to Kalaivanar Arangam, the meeting venue, in the home minister’s car. But when Shah landed at the airport, the entire barrage of the AIADMK ministers were seen standing in a queue to welcome him.

Though the alliance has been confirmed, the state BJP, which has always been claiming that it will lead the alliance, is yet to make a formal announcement saying that it accepts EPS as its chief ministerial candidate. The AIADMK, after a power tussle, had unanimously selected EPS as its CM candidate. Incidentally, the BJP which once said that the person pointed by the saffron party will be the chief minister in Tamil Nadu, is yet to come out in the open on this.

Sources say that more clarity on alliance, seat sharing and also the chief ministerial candidate will be put out by Shah before he leaves Chennai on Sunday. The alliance party leaders are scheduled to meet Shah at the private hotel late in the night to discuss politics. Sources also confirm that the home minister is happy that he got a positive feedback from the AIADMK and is also aware that his party has steadily increased its presence in the Dravidian land.