Ramalingam is perceived to be close to M.K. Alagiri 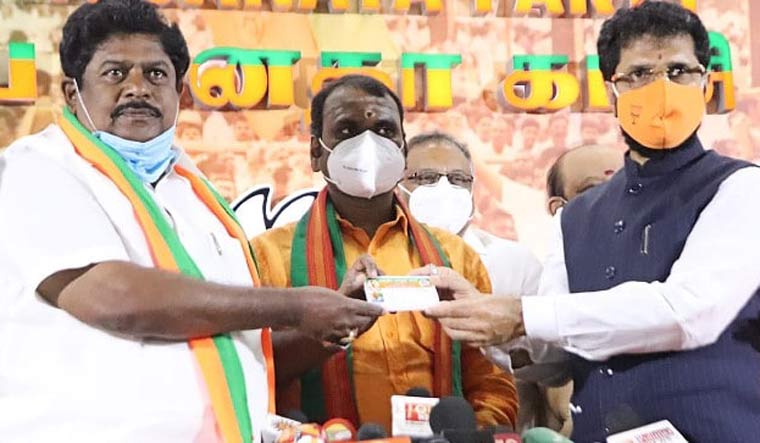 On a day when Union Home Minister Amit Shah’s visit was believed to redefine the electoral path for the BJP in the state, the saffron party has roped in yet another expelled leader from the DMK, who is perceived to be close to M.K. Alagiri. Former Rajya Sabha MP and DMK’s expelled farmers' wing leader K.P. Ramalingam, on Saturday, joined the BJP, in the presence of party national general secretary C.T. Ravi, hours ahead of Shah's landing in Chennai.

The BJP, which is on a recruitment drive across the state, on Saturday, roped in Ramalingam who was suspended from the DMK earlier this year. Ramalingam is the third such person to join the BJP since April. Earlier, V.P. Duraisamy joined the BJP, while Ku Ka Selvam, a sitting DMK MLA, extended his support to the BJP. While Duraisamy and Selvam are not considered to be cadre-based leaders from the DMK, Ramalingam joining the BJP assumes significance as he is considered Alagiri’s man. Sources in the BJP say that Ramalingam will take the messages from the BJP high command to Alagiri who might either float a new party or join the BJP.

Though Alagiri had categorically denied any plans to join the BJP or launch a new party, sources say that the BJP is trying all permutations and combinations to weaken the DMK and the opposition alliance. It may be recalled that Alagiri, though he did not contest the 2016 elections, spoiled the DMK's chances in at least 30 constituencies in the south Tamil Nadu, with a difference of fewer than 300 votes.

Meanwhile, Ramalingam, after joining the BJP, said that he will talk to Alagiri about his new political path and also ask him to join the national party. “Of course I will talk with Alagiri and tell him to join the party,” he said. Ramalingam, who was once with the AIADMK, joined the DMK after MGR’s death and was the farmers' wing secretary.