He was addressing convocation of Pandit Deendayal Upadhyay Petroleum University 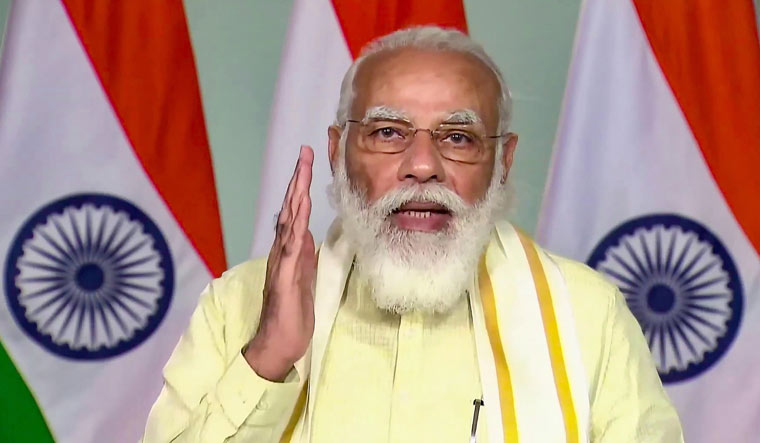 Prime Minister Narendra Modi said on Saturday that India would achieve the target of 450 GW of renewable energy generation by 2030 and 175 GW before the deadline of 2022.

He was speaking through video conference at the 8th Convocation of the Pandit Deendayal Upadhyay Petroleum University in Gandhinagar. About 2,600 students got degree certificates. The ceremony was held online due to COVID19 pandemic.

Assuming the role of a motivational speaker for the passing out students, the prime minister said that there is no such thing that cannot happen. “It is ‘I will make it happen or not make it happen’,” he said.

The prime minister observed that the decade would see investments of lakhs of crores in the oil and gas sector and India’s oil refining capacities will be doubled in the next five years. There is a great opportunity and there are changes in the energy sector during the pandemic, he observed.

Modi said that the target is to reduce the carbon footprint by 30 to 35 per cent. He also added that the effort is to increase the contribution of the natural gas by four times.

He exhorted the students to be part of the movement of “Atmanirbhar Bharat” (Self-reliant India). Modi also exuded confidence that the students of PDPU would become the strength of Self-Reliant India by their skill, talent and professionalism.

Addressing concerns that the passing out students would have, Modi said that it is natural to have questions as to what would happen when you are passing out at a time during the pandemic. However, there is huge opportunity, he said.

Continuing to guide the students, he said that the one who defeats challenges is a winner and this can be seen in case of every successful person. Sense of responsibility gives birth to sense of opportunity, he added. One should have a clean slate and a clean heart to do things, Modi added.

Giving an example of how not going with preconceived notions helps, he recalled the days when he succeeded in getting the agriculture and domestic feeders of electricity separated after he became chief minister of Gujarat in 2001.

Modi asked the Gujarat government to see if it can make changes in the law and rename the Petroleum University as Energy University as the scope of the University has expanded a lot.

Gujarat Chief Minister Vijay Rupani said that Gujarat is set to become a global hub in education with prestigious institutes like the petroleum university, maritime university, railways university. According to him, apart from infrastructure, the right atmosphere is also instrumental in attracting global students.

Chairman of Reliance Industries Mukesh Ambani said that by the mid of this century, the world would consume double the energy that it is consuming now. He also said that India’s per capita energy need will double and we would need breakthrough in new energy sources like green and blue hydrogen.

Ambani heads the governing body of the PDPU.