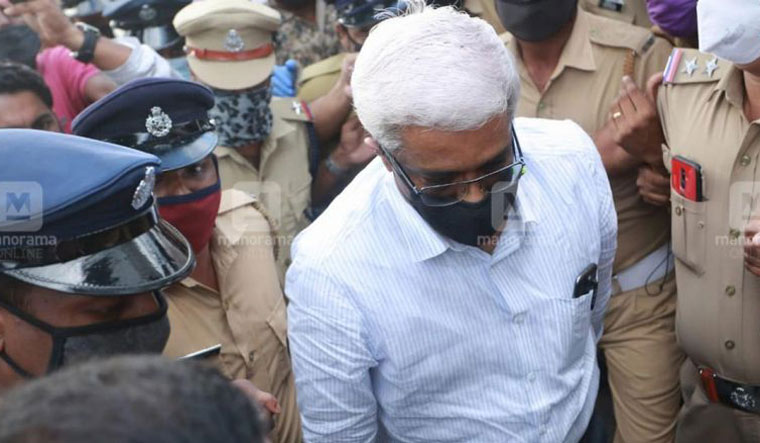 Sivasankar was taken into custody by the ED from a hospital in Thiruvananthapuram on Wednesday morning, minutes after the high court rejected his anticipatory bail pleas. He was later brought in a car to the ED office in Kochi for interrogation.

The Congress and the BJP have stepped up pressure on the chief minister to quit after Sivasankar was taken into ED custody.

Protests were held at various parts of the state, including in front of the secretariat in Thiruvananthapuram, by opposition parties and their youth wings demanding the resignation of the chief minister. The protesters even burnt the effigy of Vijayan in some places.

Earlier, dismissing Sivasankar's plea seeking anticipatory bail in the ED case, the high court had observed that the agency was relying on the statements given by him as also prime accused in case, Swapna Suresh and his chartered accountant Venugopal.

There is clear indication that the IAS officer was very close to Swapna.

The court further said the statements given by the accountant and the accused Swapna Suresh strongly indicate the involvement of Sivasankar.

Central agencies—National Investigation Agency, Customs and the Enforcement Directorate—are conducting separate inquiries into the seizure of gold worth nearly Rs 15 crore from a "diplomatic baggage" at Thiruvananthapuram International airport on July 5.

Several people, including two former employees of the UAE consulate in Thiruvananthapuram, Swapna Suresh and Sarith P S, have been arrested by the central agencies in connection with the case.

Leader of opposition in the state assembly, Ramesh Chennithala has demanded the resignation of the chief minister.

"Without further justifying Sivasankar, the CM should step down from the post. It was the Chief Minister's Office that made all the moves to protect the accused in the gold smuggling case," he alleged.

BJP state chief K. Surendran said that it has now become clear that the CMO intervened in the gold smuggling case.

"When the agencies question Sivasankar, more details will come out. The court order has cornered the Left government in the state.