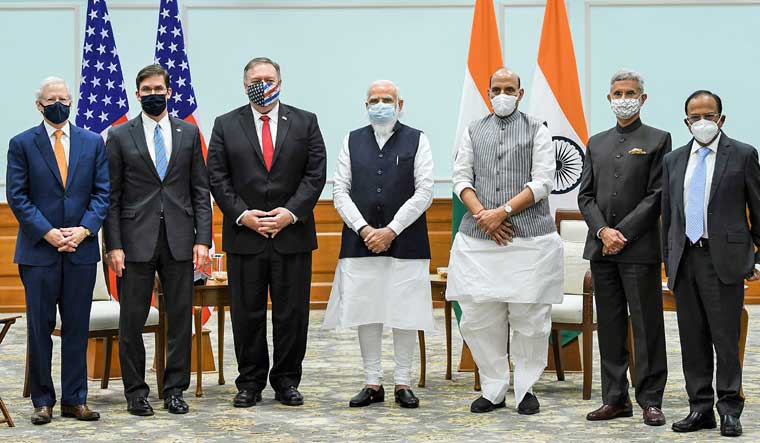 Barely a week before the US Presidential Election, India and the United States held the crucial 2+2 ministerial level dialogue in New Delhi on Tuesday afternoon. Though the Indian leadership was not believed to be keen to have the meeting at this juncture, it was scheduled at the instance of Washington.

Before going for the meeting, US Secretary of State Mike Pompeo and Defence Secretary Mark T. Esper held a 45 minute long meeting with National Security Advisor Ajit Doval. Doval was seen exchanging elbow bumps with the US leaders, instead of conventional handshake. During the meeting, both sides discussed a number of issues and challenges of strategic importance along with six-month-old India-China military standoff in Eastern Ladakh.

Later, Pompeo and Esper held extensive talks with their respective counterparts—External Affairs Minister S. Jaishankar and Defence Minister Rajnath Singh. Apart from having comprehensive discussions on key aspects of bilateral defence cooperaton, the long-awaited Basic Exchange and Cooperation Agreement (BECA), the last of the four foundational agreements, was signed. While Logistics Exchange Memorandum of Agreement (LEMOA) which is for reciprocal logistical support and communications, Compatibility and Security Arrangement, COMCASA, provides greater access to niche military technology. BECA gives the Indian military an access to classified geo-spatial data as well as critical information to navigate a cruise missile or an armed drone to the target with enhanced accuracy. Both military can share highly-classified information in real time without fear of being compromised.

While saying that signing of such agreement indicates the level of trust that has developed between India and the United states, defence officials claim that it also sends a strong message to increasingly aggressive China.

"Signing of BECA today after signing of LEMOA in 2016 and COMCASA in 2018 is a significant achievement,” Defence Minister Rajnath Singh said at the joint press statement. He added that both sides have had comprehensive discussions on key aspects of our bilateral and multilateral cooperation.

"We considered the major challenges we face. The need for quick economic recovery and growth, prevention of the pandemic, rebuild the global supply chains and related issues received obvious priority in our discussions," Rajnath Singh said.

It is notable that the US has been sharing satellite images and other technical intelligence on Chinese troops and weapons movement on the LAC during the ongoing stand-off. And now, with BECA, such information will be made available to Indian forces when needed. According to defence officials privy to the development, the agreement allows mutual technical assistance, information exchanges relevant to cartographic, geodetic, and geophysical developments, and production processes and techniques. Under the agreement, maps charts, commercial and other unclassified imagery, other geo-spatial information and data, including geodetic can be exchanged.

"The way I see, the agreement goes beyond tactical objectives and includes exchange of geo-spatial-intelligence information for use by the government for defence and other purposes. The US would exchange technical and procedural information about methods, specifications and formats for the collection, processing, and production of geo-intelligence information with India. This agreement would benefit India in a more strategic manner and enhance the adoption of GIS technology in key decisions. At Esri India, we have been working with different organizations to deliver GIS solutions for strengthening National Security. We see this agreement as an opportunity for more engagements with defence organizations in India,” Agendra Kumar, president, Esri India said. Esri is a global leader in the GIS software space and delivers GIS solutions to several sectors including defence.

Highlighting the significance of posting Liaison Officers in each other's military establishment, Rajnath Singh said it could be leveraged to enhance our information sharing architecture. "To sum it up, our military-to-military cooperation is progressing well."