The Army has significantly bolstered deployment of troops and weaponry 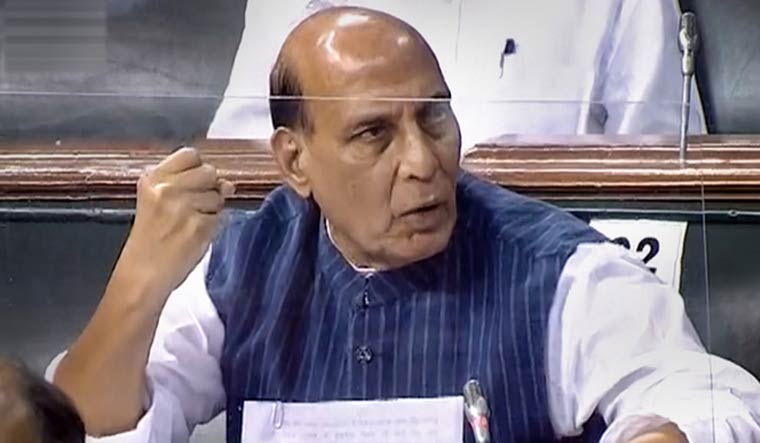 India always tried to maintain good relations with its neighbours, but situations arose from time to time when its armed forces had to make supreme sacrifices to protect the sovereignty and territorial integrity of the country, Defence Minister Rajnath Singh said on Saturday. His comments during an address to a group of soldiers at the Indian Army's 33 Corps in Sukna in Darjeeling district came in the midst of a festering border row with China in eastern Ladakh.

Before the event, the defence minister reviewed the combat preparedness of the Indian Army during a high-level meeting at the key military base which is responsible for guarding the Line of Actual Control (LAC) with China in the Sikkim sector.

In his address to the soldiers, Singh also mentioned the death of 20 Indian soldiers during a clash with the Chinese military in Galwan Valley in eastern Ladakh on June 15.

"India wants good relations its neighbours. India always tried for good ties with the neighbouring countries. But certain situations emerged from time to time when our soldiers had to make the supreme sacrifice to defend sovereignty and territorial integrity of the country," he said.

"This time too 20 soldiers of Bihar regiment had to sacrifice their lives to protect the country. I do not want to reveal what happened to the other side," Singh said.

The defence minister arrived at the key military base, popularly known as 'Trishakti' Corps, late in the afternoon. This is part of his two-day visit to West Bengal and Sikkim to review the military preparedness in view of the border row in eastern Ladakh as well as to celebrate Dussehra with soldiers.

Singh is accompanied by Chief of the Army Staff General Manoj Mukund Naravane.

The Army has significantly bolstered deployment of troops and weaponry along the nearly 3,500 km-long LAC, including in the Sikkim and Arunachal Pradesh sectors.

The officials said top commanders of the 33 Corps gave detailed briefing to the defence minister and Gen Naravane on the situation along the LAC in Sikkim sector as well as about deployment of troops and weapons.

In his interaction with the troops, the defence minister conveyed his wishes to them on the occasion of Vijayadashami and hailed their dedication in securing the nation's borders.

"Due to brave soldiers like you, the borders of this country are protected. The whole country is proud of you," he said.

The defence minister also talked about the rich history of the Trishakti Corps.

"I extend my best wishes to all of you and your family for the festival of Vijayadashami," the defence minister's office tweeted quoting him.

Officials said Singh will perform 'Shastra puja'(worship of weapons) at Sherathang area in Sikkim on Sunday morning on the occasion of Dussehra.

The defence minister had performed 'Shastra Puja' in the French port city of Bordeaux during Dussehra last year as he was on a bilateral visit to the country then.

Singh has been performing 'Shastra Puja' during Dussehra for the last several years including during his tenure as the Union Home Minister in the previous NDA government.

Almost all formations of the Indian Army along the LAC are on a very high level of alert in view of the border row with China in eastern Ladakh.

India and China are locked in an over five-month-long bitter border standoff in eastern Ladakh that has significantly strained their ties.

Both sides held a series of diplomatic and military talks to resolve the row. However, no breakthrough has been achieved to end the standoff.