Could there be a further realignment in equations ahead of the elections? 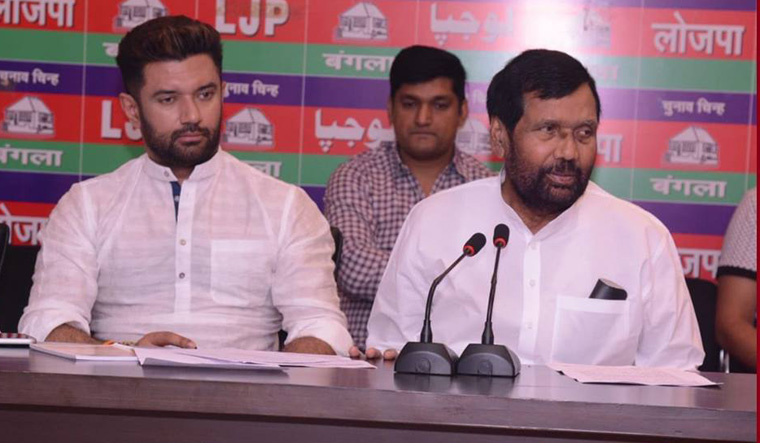 It has not been a good month politically for Chirag Paswan and his Lok Janshakti Party (LJP) in Bihar. After his decision to burn all bridges with JD(U)'s Chief Minister Nitish Kumar and go at it alone in the state elections, and then losing a seasoned veteran in his father Union minister Ram Vilas Paswan, the party is now faced with the prospect of erstwhile NDA partner BJP turning fully against it. But, it has also found an unlikely ally. The opposition grand alliance chief ministerial candidate, RJD's Tejashwi Yadav, came out in open support of Chirag, accusing Nitish Kumar of doing injustice to LJP. "What Nitish Kumar did with Chirag Paswan is not good. Chirag Paswan needs his father at this time more than ever before but Ram Vilas Paswan is not among us and we are sad about it. Nitish Kumar did injustice to Chirag Paswan," Tejashwi tweeted.

This has set tongues wagging in the state. Could there be the possibility of a further realignment in political equations ahead of the elections?

Chirag's gameplan was clear: He had openly stated his loyalty to the BJP. By contesting in over 140 seats, a majority of them in direct competition against the JD(U), Chirag's plan will be to cut into Nitish Kumar's votes and emerge a kingmaker in case the NDA falls short of majority. Chirag had also repeatedly said that there is strong anti-incumbency against Nitish Kumar, and that a coalition of the LJP and the BJP will come to power in the state, post-polls.

Initially, the BJP, even while insisting that the NDA was fully behind CM Nitish Kumar, was guarded and mild in its critique of the LJP. This raised questions as to whether Chirag was on the warpath with the private auspices of the saffron party leadership at the Centre. Now, however, post Ram Vilas Paswan's passing, the BJP seems to have changed tack.

In a stinging attack, Bihar BJP leaders tore into Chirag, accusing him of creating confusion in the minds of the electorate by claiming close proximity to senior BJP leadership, including Prime Minister Narendra Modi. Several top BJP leaders, including Union Minister Prakash Javadekar and Bihar Deputy Chief Minister Sushil Kumar Modi, called LJP a 'vote katua'—in colloquial terms a vote-eater that does not benefit itself or anybody around it.

The LJP chief voiced strong displeasure over the use of the term 'vote katua', and asserted his party will win more seats in the Bihar assembly polls than the JD(U). "I am pained at the term being used against the LJP. They should apply their own wisdom and not use such words just to make somebody happy. I don't mind whatever BJP leaders say, because I know they are just putting words to the chief minister's thoughts," Chirag said.

Chirag also said that BJP leaders were free to throw barbs at the LJP, as part of their "coalition dharma", but he would always hold Prime Minister Narendra Modi in high regard. "Amit Shah was right. We have decided to fight Bihar elections on our own and not as part of the NDA. But that doesn't mean one has to sever personal ties. I will continue to respect Prime Minister Narendra Modi, who stood by my family when my father and LJP founder Ram Vilas Paswan was undergoing treatment in Delhi," he said.

Urging more respect from the BJP towards his late father and former Union minister, he said they should not use such terms for a party built painstakingly by somebody who was their colleague in the government just until 11 days ago. "Ultimately, a BJP-LJP government will be formed in the state after November 10," he said, and added the BJP should not say things that may hamper possibilities of a future coming together of the two. "The LJP will win more seats than the JD(U) and will build a new and young Bihar with the pledge of #Bihar1stBihari1st," Chirag said in a tweet.

Lalu Prasad Yadav, Tejashwi Yadav's father, and Ram Vilas Paswan have roots that go long back, deep into the socialist movements of early independent India. It is not inconceivable that Tejashwi and Chirag join hands, especially if the latter helps the opposition by playing spoilsport against the NDA in crucial constituencies. When all is said and done, Chirag has still firmly planted himself in the BJP camp, but there are still a lot of moving pieces in the story. The next few days will give us a decisive answer.