Recalling the Indo-Pak War of 1965

September 23 marks the 55th anniversary of the war 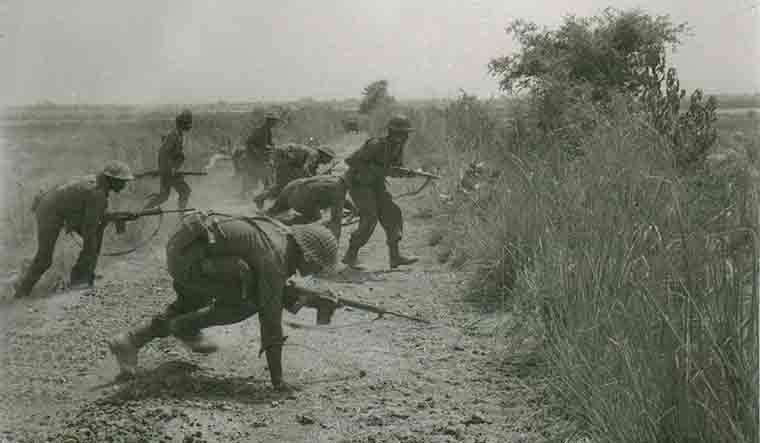 Front-line troops of the Indian Army fighting in the Kasur sector in Pakistan during the 1965 war | Imaging: Rajesh A.S.; Photo Division, Ministry of Defence

September 23 will mark the 55th anniversary of the India-Pakistan War fought in 1965 over the issue of Jammu and Kashmir. This was the second attempt by Pakistan to annexe Kashmir by force. Its first attempt to do so, 18 years earlier, had resulted in its defeat and retreat from most of the captured areas except what came to be called Pakistan occupied Kashmir (PoK ), and led to the intractable and emotional Kashmir problem which continues to simmer adversely affecting the relations between the two countries.

Between 1948 and 1965, India and Pakistan almost went to war on two occasions - in 1950 before the famous Nehru - Liaqat pact was signed , and again in October 1951- but the high national and international stature of Pt Jawaharlal Nehru and the good sense of Pakistan premier Liaqat Ali, in 1950 and his assassination in 1951, prevented in the last moments, what had seemed to foreign observers, an unavoidable bloody clash.

Lal Bahadur Shastri had succeeded the charismatic and all-powerful Jawaharlal Nehru who passed away on May 27, 1964 after 17 years as the country's prime minister and the most adored leader after the Mahatma. The Pakistan President Field Marshal Ayub Khan, who met Shastri briefly at the Karachi airport in early in October 1964, was not impressed by the humble personality of India's new PM and equated his simplicity with weakness. This was a cardinal error of judgment on the part of the Pakistan president with an Army background. But this was only his first mistake. He thought it was the ripe time to wage a war against India and annexe Kashmir by force on the strength of weapons and sophisticated military equipment acquired from USA and other western countries during the last ten years. India, the Pakistan establishment thought, had still not recovered from the consequences of 1962 Sino-Indian border conflict.

To test India's operational readiness, Pakistan first carried out a dress rehearsal. In April 1965, its Army occupied a disputed territory in the marshy Rann of Kutch bordering Gujarat along the Arabian sea. There were some military clashes but, due to an unfavourable terrain, the response of Indian Army was not full spirited and, before any escalation could take place, Great Britain intervened and brokered a ceasefire. The Pakistan establishment took this as a sign of weakness on India's part and concluded that the Indian Army was not ready for war. Badly advised by his foreign minister Zulfikar Ali Bhutto, Ayub Khan made his second

mistake. In August the Pakistan government, under the code name 'Op Gibralter', sent well-trained infiltrators into the Kashmir valley hoping to foment a pro-Pakistan uprising and create conditions for a military intervention. The Indian Army was ordered to cross the ceasefire line and occupied the strategic posts of Haji Pir, Uri and Kargil. In response the Pakistan Army launched a massive armoured attack in the Chhamb sector towards Akhnoor, south west of Jammu, threatening the road link to Kashmir.

Prime Minister Lal Bahadur Shastri immediately ordered the Indian Army to cross the international border with Pakistan and move towards Lahore and Sialkot. This eased the pressure on Jammu and Kashmir as Pakistan had to withdraw a substantial number of its forces from the state to defend its territory in W. Punjab and Sialkot. Massive tank to tank battles took place in Asal Uttar in east Punjab, Chiwanda in west Punjab and Phillora in Sialkot sector. Indian armour regiments inflicted heavy tank casualties in all the sectors destroying over 300 tanks of Pakistan while suffering much lesser casualties. Similarly, the infantry acquitted itself in the battles of Haji Pir , Dograi , Barki and some others. Some of the tank regiments and infantry units that bore the brunt of offensive /defensive operations in various sectors were Poona Horse (17H), Deccan Horse( 9H ) Hodson Horse (4H) , 3 Cavalry ,16 Cavalry, 1 Para, 4 Grenadiers, 4 Sikh, 5/9 Gorkha Rifles, 3 Jat ,16 Punjab, 4 Rajput and 19 Punjab. Britain and USA cut off arms , food and all supplies to both India and Pakistan. But Russia (then Soviet Union) befriended by India, during the Nehru - Khrushchev days, not only fully supported India, but also dissuaded China from going to Pakistan's aid. Under pressure of world opinion and the United Nations both countries agreed to a ceasefire which came into effect on September 23 , that is this day 55 years ago.

Unfortunately, though India won the war (Pakistan also claims it did so), it lost its highly popular leader who led India to victory. Lal Bahadur Shastri, who had endeared himself to the people of India by his simplicity and humility, and coined the still reverberating slogan of Jai Jawan Jai Kisan, died at Tashkent on January 11, 1966, after signing the Tashkent agreement with Ayub Khan by the herculean efforts undertaken by Soviet premier Alexi Kosygin. The Jan Sangh, predecessor organization of the present BJP, had made arrangements to greet Shastri at Palam airport with black flags opposing the Tashkent agreement. But Shastri was never to return. His mortal remains, carried on the shoulders of Ayub Khan and Kosygen, were received at the Palam Airport by Dr S. Radhakrishnan, President of India, cabinet ministers and other dignitaries, including diplomats and the chiefs of the three services.

The most memorable part of any war is the roll of honour: names of the gallant officers and men whose valour and sacrifice cannot, and must not, be ever forgotten. Posthumous winners of Param Vir Chakra (PVC) , the nation's highest gallantry award, were Havildar Abdul Hamid, 4

Grenadiers and Lt Col AB Tarapore , Poona Horse. Amongst the 39 winners of Mahavir Chakra were Maj Gen RS Sparrow (he had won his first MVC in the war of 1947-48 ), Lt Col AS Vaidya, Deccan Horse (later General and Chief of Army Staff ) , Major ( later Brigadier) Sant Singh and Maj (later Lt General) RS Dayal , Lt Col ( later Brigadier) Desmond Hayde , 3 Jat and Wg Cdr (later Air Marshal ) PP Singh, IAF. Vaidya and Sant Singh went on to win the Mahavir Chakra again in 1971 as Brigade Commanders. While the Navy headed by Vice Admiral BS Soman, had a very limited role in the entire operations, the Army Chief Gen J.N. Chaudhari and the Air Chief Air Marshal (later Marshal of Air Force) acquitted themselves with honour and provided exemplary leadership to the forces. So also, the Western Army Commander Lt Gen Harbaksh Singh whose brilliant strategy was a decisive factor in the success of land operations. Defence Minister YB Chavan, who had succeeded the controversial Krishna Menon in November 1962, was a great asset to Prime Minister Shastri with his experience of handling the Defence Ministry efficiently and providing sound military advice that included the use of air power at an early stage of the war.

The writer is a political analyst and ex-Army officer