Selfie campaign ahead of Bihar polls demand 50% tickets to women

A Twitter campaign with the hashtag #50pcMahilaUmeedvaar was also trending 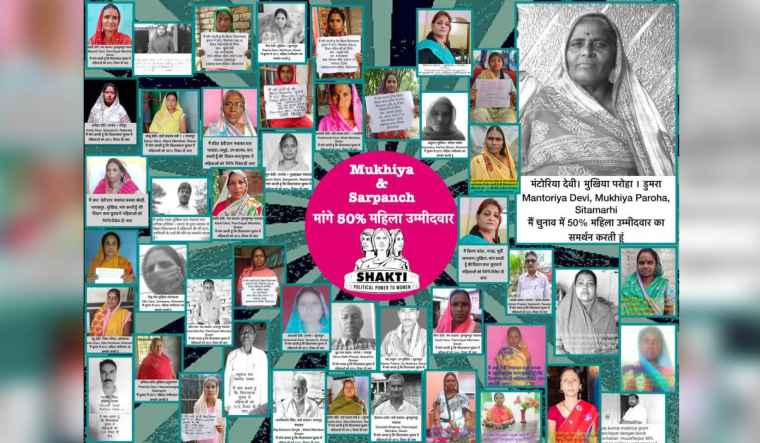 A selfie campaign that has roped in women mukhiyas, sarpanchs and legislators in Bihar is being organised to build pressure on political parties in order to promote fielding at least 50 per cent female candidates in the upcoming state assembly elections.

The campaign organised by Shakti—a women’s collective working on political leadership of women—includes elected women representatives from the panchayats, nyay panchayats to the assembly to start a dialogue within the political parties and among voters.

The campaign also reminded parties and the women that 60 per cent of voters are women. Bihar introduced 50 per cent reservation for women in the local bodies in 2006, but has a meagre 11 per cent representation of women in its 243-member assembly. While, the local bodies have elected two lakh women, not even one per cent of these women get tickets to contest in the assembly. The women don’t have a career progression. The political parties have been giving around 9 per cent tickets to women in each election cycle.

Volunteers from civil society groups, farmers, social workers, working women,  students, minority and Dalit groups took part in the call campaign and reached out to women elected representatives to sensitise them on the women’s political rights and urged them to raise the issue within their party forum.

Ajay Ravidas, member of Bihar Ambedkar Students Forum said, “When I spoke to the block chief of Jamui on whether 50 per cent of women should contest the assembly elections, she acknowledged the dearth of political leadership among women. She said that no one could do justice to women’s rights if women lack the decision making power at the state level.”

Zafreen Neha of Centre for Social Equity and Inclusion said, “Female MLAs understand the importance of women in governance, and the need for pressure on parties. But the male PAs pick up the call and act as gatekeepers, preventing any direct conversation with the woman MLA. This is symptomatic of male leaders blocking increased women’s representation.

Tara Krishnaswamy, co-founder of Shakti, said, “It is a landmark effort for women’s political rights. We have simultaneously reached out to elected women representatives in local bodies and at the state level. The 50-odd village sarpanchs, 16 MLAs together represent 37 lakh voters, who will demand 50 per cent female candidates in the upcoming Bihar elections. We hope the political parties will take not of this and ensure the polls are genuinely representative and gender balanced.”