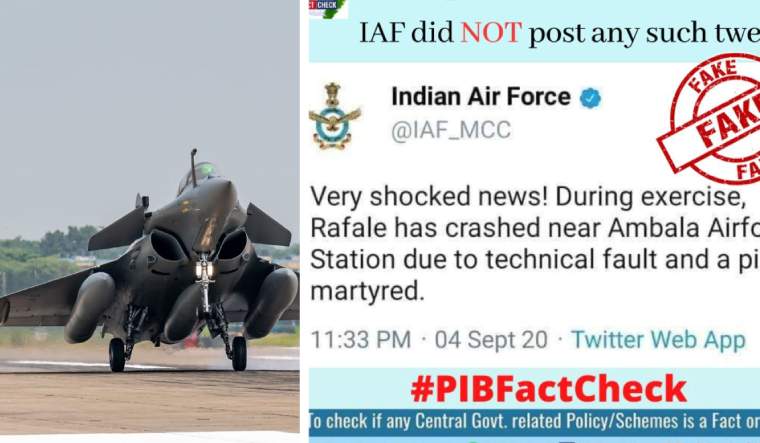 The acquisition of the Rafale jets by India has not been received well by Pakistan | Supplied; Twitter

Pakistan’s unease at the Indian acquisition and the formal induction of the Rafale jets on July 29 has resulted in a viral hoax about one of the jets crashing during training, leaving two pilots dead.

Not only were fake Twitter profiles of journalists used to spread the news, a fake profile of the Indian Air Force was also created, with a tweet that read: “Very shocked news! During exercise, Rafale has crashed near Ambala Airforce Station due to technical fault and a pilot martyred.”

This false tweet was put out on 11.33 pm at September 4. It became the start of a string of hoax tweets and posts which floated around till at least September 11. The Twitter handles remained the same but the names of the handles kept changing from one journalist to another. Hundreds of retweets of these fake tweets were made by Pakistanis. The same news was also shared hundreds of time over other social media.

A reverse image search done by SM Hoax Slayer found that the three photos used to illustrate news of the current crash were from the Mirage 2000 crash in Benguluru in February 2019. Two pilots had lost their lives in the aforementioned clash.

The acquisition of the jets by India has not been received well by Pakistan.

In July this year, when Pakistan had first received news of the acquisition, Pakistan Foreign Office Spokesperson Aisha Farooqui had said, “It is disturbing to note that India continues to amass military capabilities beyond its genuine security requirement. Transfer of advanced systems, where there is an open intention of conversion into nuclear delivery platforms, calls into question the commitment of international suppliers to non-proliferation commitments.”

She had further said that India had nuclearised the Indian Ocean. “Pakistan has been consistently highlighting the risks of massive Indian arms build-up as well as their offensive security doctrine and force postures,” she said.