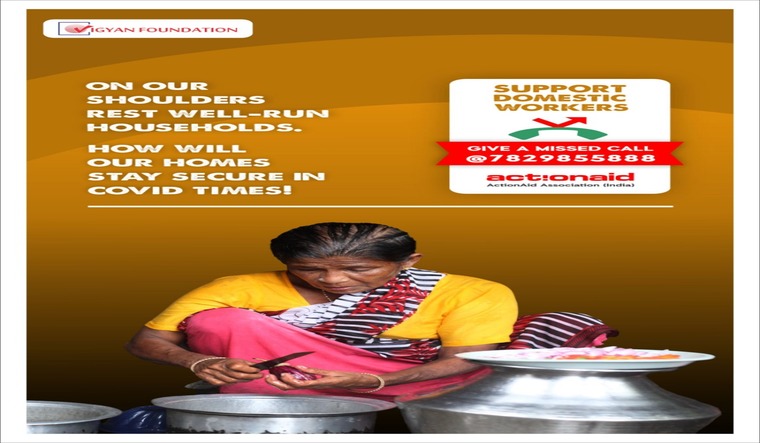 Their work knows no boundaries and their hours are uncertain. Yet the domestic workers, among the most vulnerable among workers, have scant legal and social protection. Now a missed call to the number 7829855888 (automatically disconnects after two rings and there are no user charges) hopes to draw the government's attention to frame policies and laws that protect and advance their rights.

Despite the critical nature of their work, the government does not have exact numbers of those who undertake domestic or household work.

A press release issued by the government on January 7, 2020 read, “No such data is maintained at the Central level. According to National Sample Survey (NSSO Statistics-2011-2012, 68th round), an estimated 39 lakhs people are employed as domestic workers by private households, of which  26 lakhs are female domestic workers”.

A draft policy has been under consideration which includes: inclusion of Domestic Workers in the existing legislations so that they have rights and benefits; right to form their own associations/unions; right to minimum wages and access to social security; right to enhance their skills; protection of domestic workers from abuse and exploitation; access to courts, tribunals for grievance redressal; establishment of a mechanism for regulation of private placement agencies and establishment of a grievance redressal system for domestic workers.

The Domestic Workers’ Convention (C189) of the International Labour Organisation (ILO) has been ratified by only 29 countries since it was drafted in 2011. The 30th country to join it will be Mexico where it will come into force in June 2021. India and many major countries, including the USA, the UK and France are not signatories to it.

The pandemic has been tough on domestic workers. Not only were they barred from entering the homes that they worked in, at many places they were stopped from using lifts. Wages were arbitrarily deducted, in some cases even held back, though promises of return to work were extracted. There have also been reports of women being forced into sex work to make ends meet.

ActionAid has conducted a rapid national survey/study of informal workers including women workers. The major findings of it are that almost four in five respondents reported major loss of livelihoods and wages; a larger share of migrants (more than their share in the overall population) is of Scheduled Castes and Scheduled Tribes, more than half such workers having outstanding debts before the start of the pandemic and less than two in five are consuming their required diet in a day.

The supporters of the campaign hope to get at least one lakh calls to draw the government's attention to the plight of these workers so that swift legislation can be enacted.