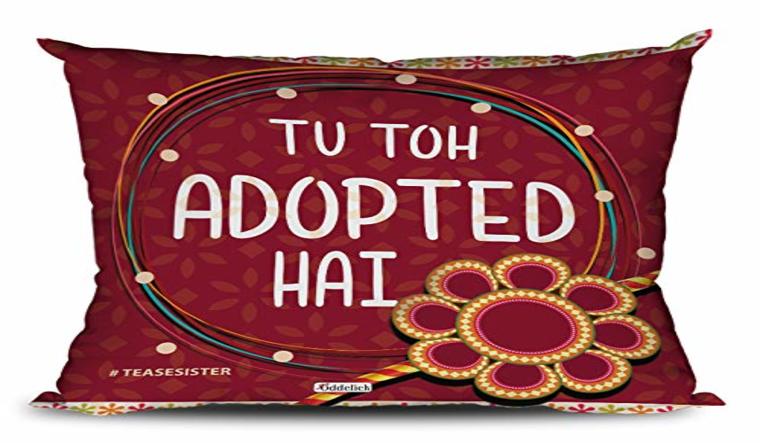 E-commerce giant Amazon has come under attack from social media users and adoptive parents for selling merchandise bearing messages like "Tu toh adopted hai" (You are adopted) and "Tujhe na mummy, papa dustbin se utha ke laye the" (Our parents picked you from a dustbin) as Raksha Bandhan gifts.

They said such "tasteless" jokes reinforce the stigma around adoption.

Despite repeated attempts, Amazon could not be reached for comment.

"One of the most hilarious dialogues exchanged between a bro-sis duo is "Tu adopted hai". This Rakhi combo will make you both laugh and reminisce about those days when you had sweet disagreements. So, bring home this funny Rakhi combo, consisting of an exquisitely designed Rakhi, some homemade chocolates, and cushion, to spend some more time together laughing", read the product description of a Raksha Bandhan hamper on Amazon.

The matter first came to light when social activist and adoptive parent Shabnam Hashmi shared on Twitter on July 31 a screenshot of a mug which read: "You're adopted but we love you".

She had also requested Amazon to take it down from its website.

"Phrases like 'you are adopted but we love you' seem to say that they (adopted children) are different from a biological child and do not deserve the same kind of love, and as if loving them is doing some kind of favour to them," Hashmi said.

"So, these products need to be taken off (the website) and that can only happen if people boycott them," she said.

Soon after Hashmi shared the post, there was a flurry of tweets and signature campaigns launched against the "insensitive" gift articles.

"This is absolutely insensitive.... siblings teasing one another as 'adopted' also comes from the general perception about the adopted child being 'lesser'/'unfortunate' etc ... hence a gift or product completely takes it to another level of insensitivity....," a Twitter user, Ritu Goel, said.

An adoption community, with over 200 signatories, has demanded immediate removal of such products from Amazon and requested people to boycott such "offensive merchandise".

A petition on change.org against companies selling such products has already garnered nearly 800 signatures.

Meena Radhakrishna, a member of the adoption community, said the fact that these products are selling in large numbers confirms that people have not evolved at all as a society and as consumers.

"The biological children who get pranked are reassured (by their families) after a few tears that they are the real daughters or sons," she said.

This comfort is not available to adopted children because of the society's fixation with "blood connection, our genes, our caste and community" and so on, she said.

Radhakrishna's adoptive daughter Shirali Radhakrishna Tyabji said if the company must sell "unique Rakhi products", why can't it promote the idea of sisters tying Rakhi to each other as many families only have daughters.

"These products will then reaffirm the traditional value that Raksha Bandhan is a pledge of lifelong protection and care between two siblings… regardless of gender," said Tyabji, who celebrates the festival with her younger sister every year.

Some activists said they were pained to see companies using such regressive ideas to sell their products.

Conceding that the stigma around adoption still exists in the society, they said the psyche at large will change when people get over the idea of 'apna apna hota hai'.

Adoption is about being sensitive towards those children who were abandoned by their parents, said Prashant Agarwal, president of Udaipur-based orphanage Narayan Seva Sansthan.

It is the only way to change the mindsets of families that are determined to have their own children as they believe 'apna apna hota hai', he said.

The Central Adoption Resource Authority (CARA), the nodal body for adoption of Indian children, has also taken note of the matter.

It has written to online retailers seeking an explanation on selling such merchandise.