Governments of India and Afghanistan worked to facilitate their return 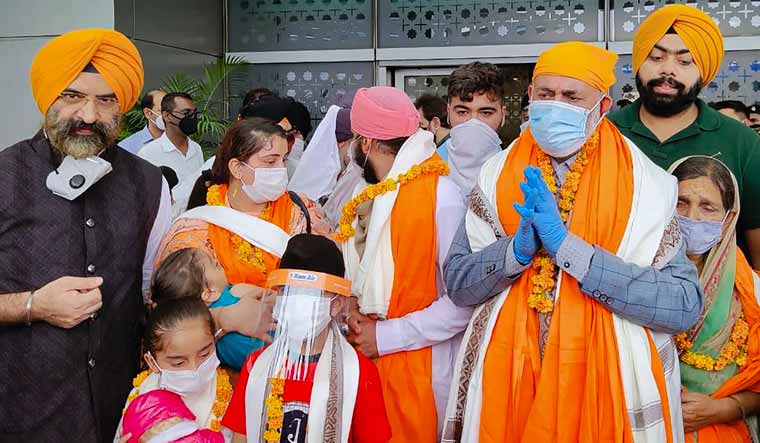 Nidan Singh Sachdeva arrived in Delhi from Kabul today. An Afghan Sikh, he had been abducted from a gurudwara in Paktia province of Afghanistan last month. After much torture, he was released on June 18.

On Sunday, Sachdeva arrived in India, along with ten other members of Afghanistan's minority Sikh and Hindu communities. Their journey to India was facilitated by the governments of both countries.

"We appreciate the efforts of the government of the Islamic Republic of Afghanistan in extending necessary support for the safe return of these families," the Ministry of External Affairs (MEA) said in a statement, adding that India has granted "appropriate visas'' to them.

This is the first batch of Afghan Hindus and Sikhs to arrive since India approved the entry and shelter of around 700 members of the community, who were keen to come here to escape attacks and persecution.

The Sikh and Hindu communities in Afghanistan has been under stress for several decades, and the once-thriving and unique community, which once numbered over 2.5 lakh, has been reduced to a handful of people. In March, an attack on a gurudwara in Shor Bazar in Kabul killed 25 members of the community— the bloodiest attack on minorities in recent times.

Two years ago, a Sikh politician, Awtar Singh, was killed in a suicide blast in Jalalabad just prior to the parliamentary elections. Singh had been standing for elections in the minority-reserved seat in Parliament. His son, Narender Pal Singh was later nominated to Parliament.

In February 2019, the Porsesh Research and Studies Organisation of Afghanistan surveyed Afghan Sikhs and Hindus and noted that the community faced harassment of several fronts, religious, economic and security. The study urged the government as well as civil society to reach out to the last of a unique piece in Afghanistan's colourful ethnic and cultural mosaic, else these people would all flee to more accepting lands.

According to the United Nations Refugee Agency UNHCR, 90 per cent of the 9,000 Afghan refugees in India are Sikhs. The community has also migrated to Canada, US, UK, Europe and Germany, but for most, the first step out is towards India, their spiritual homeland. The government's Citizenship Amendment Act (CAA) last year was aimed at expediting the citizenship process for such refugees (Hindus, Sikhs, Parsees, Buddhists and Christians from Afghanistan, Pakistan and Bangladesh)—albeit for those who had reached India before December 31, 2014.

The group was welcomed at the airport by members of the BJP and Shiromani Akali Dal. Union minister Harsimrat Kaur Badal tweeted "I join Sikh community in thanking my government for acceding to the request for evacuating them.''