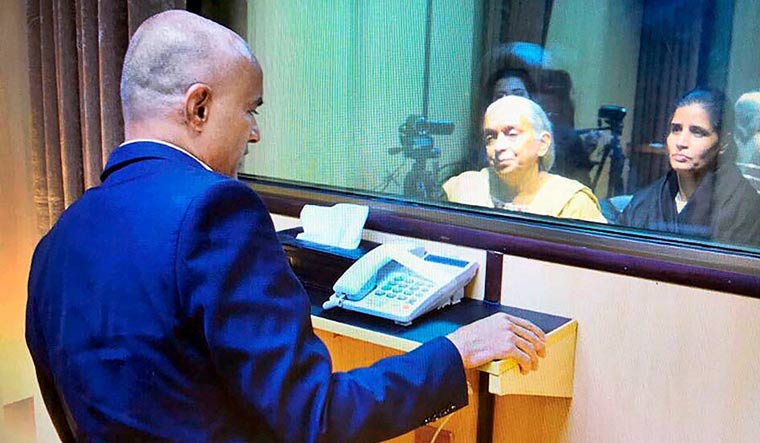 [File] Pakistan had facilitated a meeting of Jadhav with his mother and wife in Islamabad on December 25, 2017 | PTI

India has accused Pakistan of coercing Kulbhushan Jadhav to "forego his rights to seek an implementation of the judgment of the International Court of Justice’’. Pakistan’s claim that Jadhav has refused to initiate review petition against his death sentence is a “continuation of the farce’’ that has been in play for the past four years, a statement issued by the ministry of external affairs said.

“The media statement made by Pakistan today in the case seeks to mask its continuing reticence to implement the ICJ judgment in letter and spirit,’’ said Anurag Srivastava, the MEA spokesperson. “He has clearly been coerced to refuse to file a review in his case.”

The MEA statement suggests that India was aware of the ordinance passed on May 20.

India had sought “unimpeded access’’ to Jadhav to discuss his remedies under the ordinance. Jadhav’s refusal seems to be surprising. There is a “brazen attempt to scuttle even the inadequate remedy under the ordinance,’’ the MEA statement read.

Jadhav’s decision was revealed in a special press conference on Wednesday where Pakistan's additional attorney general Ahmed Irfan announced that the former Navy officer had refused to file a review petition against his death sentence. Jadhav will continue to peruse his mercy petition with the president, he said. The mercy petition—according to the Pakistan’s foreign office—is a separate process.

The ordinance fixed a time of 60 days for an appeal to be filed by Jadhav, his family or the Indian High Commission in Islamabad. Jadhav, who was invited on June 17 to file a petition for review, refused the offer. According to Pakistan, Jadhav also refused the offer of assistance for legal representation.

“Pakistan is only seeking to create an illusion of remedy,’’ Srivastava said. “They have all along maintained that their laws allowed for effective review and reconsideration while we have protested it all along. Now, after almost a year, they have made a u-turn and issued an ordinance to ostensibly provide for some sort of review,’’ he said.

India has repeatedly asked to allow a lawyer from outside Pakistan to appear in any review and reconsideration proceedings. However, Pakistan has denied it, said Srivastava.

While India has reacted strongly to the decision, the question that remains is what the next steps are. Can India still file a review petition after Jadhav has refused?

A statement issued by the Pakistan Foreign Office claims that this option still remains. The review and reconsideration petition can be filed by Jadhav, a legally authorised representative or a consular officer of the Indian High Commission, according to the statement issued.

“While Commander Jadhav’s mercy petition is still pending, India is invited to file review and reconsideration petition to give effect to the Judgement of the International Court of Justice,’’ the statement read.