‘I am in trouble, please help’: Telangana COVID-19 patient pleads from pvt hospital 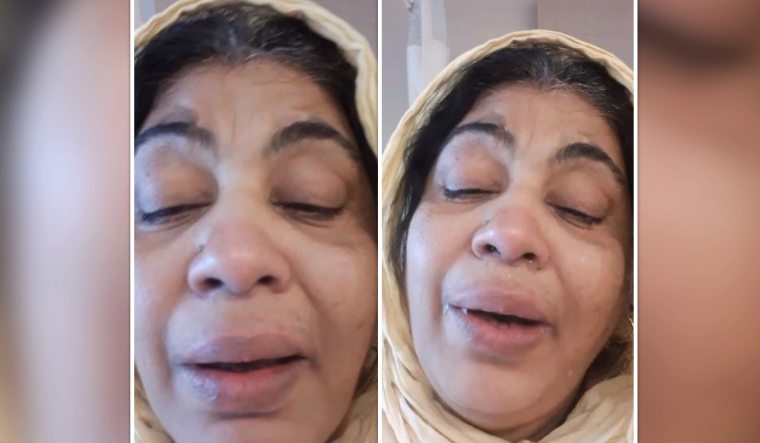 Screengrabs from the video posted by the distressed patient

A senior government doctor who decided to seek treatment in a private hospital in Hyderabad, avoiding the government-run COVID-19 hospitals, sent out a distress video after she was charged more than a lakh for a single day. In the one-minute video, recorded inside the hospital and released on Sunday, the patient accused the hospital management of forcibly confining and ill-treating her for failing to pay the dues.

“I am in trouble. I want to be discharged. Please help me,” she said while weeping on camera. “I am a COVID warrior. For one day they are charging 1.5 lakh. I cannot pay so much.”

In the video she alleged that she was not given medicines or food on time despite having co-morbid conditions like diabetes and hypertension. “I am not getting medical attention,” she said.

The civil surgeon, employed at Fever Hospital in Hyderabad, tested positive for COVID-19 on June 24 after her family members contracted the virus. Her daughter, also a doctor, tested positive along with the patient’s brother and sister. After days of home quarantine, as her oxygen levels dipped and health deteriorated, she approached private hospitals on July 1.

“I had enquired with 3-4 private hospitals and all of them told me that there were no beds. Finally, I went to one private hospital as my cousin had received treatment there,” she told THE WEEK. “Initially, we were told that there are no beds. As we were about to leave the hospital, the staff said they will arrange one. They made it look like they arranged a room for me with great difficulty. This was probably done to charge more money.”

She got admitted in the hospital on the night of July 1. Recalling her experience as a patient, she said that the behaviour of the doctors was “unethical and irresponsible”. “They did not give medicines on time and came up with excuses that there was no stock. I am a diabetic and they gave me insulin without providing food because of which I was going into hypoglycemia.

“The nurses tried to re-use cotton swabs and could not inject needle properly. When I tried to reason with the doctors regarding their unprofessionalism, they simply said I can leave the hospital. I agreed to get discharged.”

On June 3, she was asked to pay Rs 1.3 lakh. The patient said that her family members asked the management to give a concession as she stayed for only a day and already paid Rs 40,000. The patient said that she requested the management to let her go home and promised to pay later but was not allowed to leave the premises. Since the issue could not be resolved, next day, on July 4, the patient lodged a police complaint against the hospital. Later, she recorded a video and also reached out to local political leaders and higher officials in the government. At around the same time, she was told that she has to pay extra for her stay of one more day. After another round of negotiations, she paid around Rs 1.3 lakh and was discharged at around 4 am on July 5. With no ambulance service available, the patient returned home in an Uber cab.

As per the final in-patient bill, she was charged more than 30,000 per day for a room under various heads like nursing services, sanitation and room services. This is in stark contrast to Telangana government’s order that has a fixed charges Rs 7,500 for a room, without the usage of ventilator.

This is not an isolated incident as similar cases have surfaced in Hyderabad where private hospitals have allegedly detained patients or refused to hand over the dead prompting videos seeking help.

Last week, a COVID-19 patient, Mohammed Abbas Ali, died in a corporate hospital. During the treatment, his family could pay up to Rs 5.30 lakh. At the time of the patient’s death, his bills swelled up to more than Rs 10 lakh. His son made an appeal through a video that he does not have money to settle the remaining bill and claim the body. In another case, a COVID-19 patient was not discharged because of a dispute between the insurance company and the hospital. While the insurance company informed the patient that he can pay Rs 30,000 and get discharged, the hospital told him to cough up Rs 3 lakh. The patient ended up being in the hospital for five more days after which he posted a video appealing to the chief minister and health minister of the state to intervene.

Amjed Ullah Khan, leader of Majlis Bachao Tehreek (MBT) political party, has been actively dealing with such cases since the beginning of the pandemic. “There are seven bodies stuck in various private hospitals in the city and I am trying to get them released,” he said.

“The private corporate hospitals in the state are above law. All these days, they made good money. We are facing a crisis and at least now they should have a humane approach towards patients. The government knows everything but do not want to control them. The state government has issued an order capping rates in private hospitals only to make people happy. They are not interested in implementing that.”

He felt that if the private hospitals continue to charge exorbitantly, then people will be forced to sell their gold, properties for COVID-19 treatment and spend the rest of their lives in poverty.