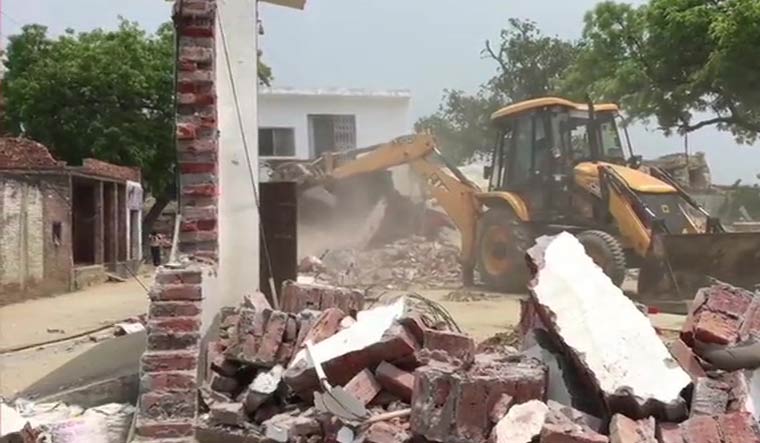 A day after history-sheeter Vikas Dubey shocked the nation by leading a gang that killed eight police personnel sent to arrest him, the Kanpur district administration on Saturday demolished his house.

The district administration sent excavators to raze the building located in Bikru village at Chaubepur block where the encounter happened. The house had been constructed without permission. It was even rumoured to have an underground bunker.

Dubey has been absconding since the encounter in Kanpur early on Friday.

Inspector General of Police, Kanpur, Mohit Agarwal on Saturday told PTI, "To nab Vikas Dubey and his accomplices, as many as 25 teams have been formed, which are conducting raids in different districts of the state and other states as well."

Police officials also said the surveillance team was scanning over 500 mobile phones and efforts were on to retrieve information pertaining to Dubey, who is facing about 60 criminal cases.

The special task force of UP Police has also been roped in.

Agarwal said a cash reward of Rs 50,000 has been announced for providing information about Dubey and the identity of the information provider will be kept secret.

He also said seven policemen, who were injured in the encounter, have been admitted to a private hospital where their condition is stable.

"In view of the allegations levelled against SO, he has been suspended and all the allegations are being thoroughly looked into. If his involvement or that of any other personnel of the police is found in this incident, then they will be sacked from the department and also sent to jail," he said.

Uttar Pradesh Chief Minister Yogi Adityanath rushed to Kanpur on Friday to meet the family members of the slain policemen and announced financial assistance of Rs 1 crore each to the bereaved families.