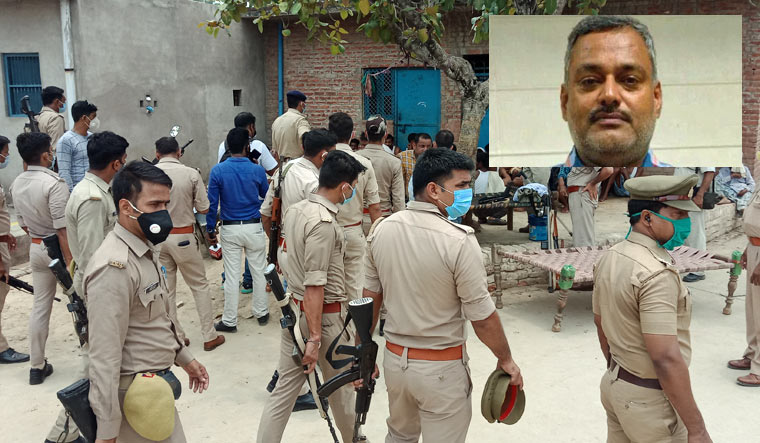 Vikas Dubey, the criminal who with his accomplices brought down eight policemen in the early hours of Friday, has enjoyed political patronage of different hues since the first case was registered against him in 1993 for robbery and criminal intimidation.

Since news of the encounter broke, social media has been swirling with pictures of Dubey that show his connection with different political parties. In one of these, he is seen with the state’s law minister Brijesh Pathak. In another which is of a poster asking for votes for his wife Richa Dubey for the district panchayat elections, Samajwadi Party founder Mulayam Singh Yadav and his son and former CM Akhilesh Yadav are seen.

The son of a farmer, Dubey lives in the village of Bikaru in Kanpur’s Chaubepur block. His house is reported to be like a fortress, with multiple cameras to keep a watch over any movement. His considerable wealth comes from brick kilns, schools and colleges — many of which he is alleged to have forcibly taken over.

His criminal career kicked off with land grabs and petty robberies.

In 1990 he committed his first notable crime— when he assaulted some men in the neighbouring village of Dibba Nivada to avenge an insult to his father. Dubey’s village and those surrounding it have a sizeable Brahmin population— thus there was no dearth of politicians peddling his case even after he was arrested multiple times.

The most prominent politician of the times who shielded him was BJP’s Harikishan Srivastava, who fought the legislative elections from the area. Dubey became his henchman. In 1996, when Srivastava shifted to the BSP, Vikas also became a member of the party.

A toxic mix of political patronage and strong-arm tactics emboldened him to the extent that in 2001 he murdered a BJP leader, Santosh Shukla within the premises of a police station. No policeman dared testify against Dubey, who was subsequently acquitted. It is also noteworthy that Dubey surrendered in the murder case when there was a BSP government in the state.

The first time Dubey’s name featured for murder was in 2000 when he is alleged to have killed the assistant manager of an Inter College located in Kanpur’s Shivli area. In 2004, Dubey murdered a cable businessman Dinesh Dubey. In 2018, he attempted to take the life of his paternal cousin Anurag Dubey. In the last, Anurag’s wife had filed an FIR naming Dubey and four accomplices.

Dubey’s unstoppable criminal run thus has been made possible by political patronage and considerable wealth.