Video of decomposed bodies being dragged in Kolkata triggers horror 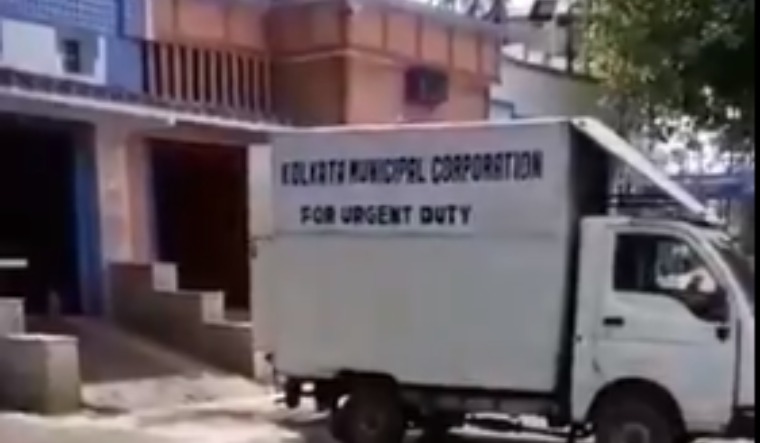 More than a dozen dead bodies were taken to a crematorium in the southern fringes of Kolkata two days ago and the people who carried the bodies had to flee with them after local residents raised a huge uproar.

The government of West Bengal started a probe on Friday after the West Bengal governor had sought a clarification from the government. Interestingly on Friday, the Supreme Court sought responses from four states—Delhi, Maharashtra, West Bengal and Tamil Nadu—on handling of bodies of COVID-19 victims and treatment being offered to patients.

The horrifying incident happened on Wednesday evening at Garia in South Kolkata when residents saw bundles of bodies being carried in an ambulance and then being taken inside the local crematorium. Almost all were in a decomposed state. The incident happened at Boral in Garia police station area. Interestingly, Boral was the place where almost 70 years ago, Satyajit Ray shot his world famous film Pather Panchali.

Some workers were taking the bodies—one by one—inside the crematorium. The Home Department later said said that the bodies were unclaimed and were not of COVID-19 patients.

However, the local residents raised an alarm.

“This is precarious, dangerous and obnoxious. How could they do that? People who carried the bodies did not wear any PPE and also the bodies were in a decomposed stage,” said Swapan Baidya, a resident of the locality in Boral.

Suspicion arose over how these 13 dead bodies were recovered and from where. There was no justification or any clues from the state government as it refused to entertain any question on the issue till the people drew the attention of West Bengal Governor Jagdeep Dhankhar on Thursday evening.

Dhankhar sought a detailed clarification on the matter.

Dhankhar said, “I am anguished! Share public outrage and deep concern at most unconscionable and heart-rendering episode. Callous dragging of dead bodies were reflected in the video. I am shocked at the state of affair.”

The people of the locality were angry and they suspected recurring incidents at Dhapa dumping ground in Kolkata where large number of bodies of COVID-19 victims was reportedly cremated. People alleged that these bodies were also of COVID-19 patients.

“In fact, after we resisted, they most likely went to Dhapa dumping ground,” said Baidya.

The local residents went to Garia police station on Thursday, but many of them were allegedly detained by local police.

Dhankhar said in the statement, “Given sensitivities of people and wider ramifications it may have, I urge chief minister to be responsive in humane manner. A police action to repress would be hurtful. In our culture, dead bodies have to be accorded highest respect. Scars of Dhapa and now this shame.”

The governor said even if the dead bodies are not of the COVID-19 patients, handling human bodies in such a way—where carriers were seen pulling and dragging the bodies like an animal—is utterly shocking and needed immediate probe.

“Issue is not whether the dead bodies were COVID ones! That is matter of probe. Issue is how human bodies can be so shamelessly dragged! Being treated worse than animals,” said the governor.

Senior officials of the West Bengal government refused to say anything.

An official of the Kolkata Police said, “A probe is on. It is no doubt a very bad incident, which should never recur. People are shaken seeing it. Even we are.”