Shah addressed a virtual rally of the BJP workers in Bihar 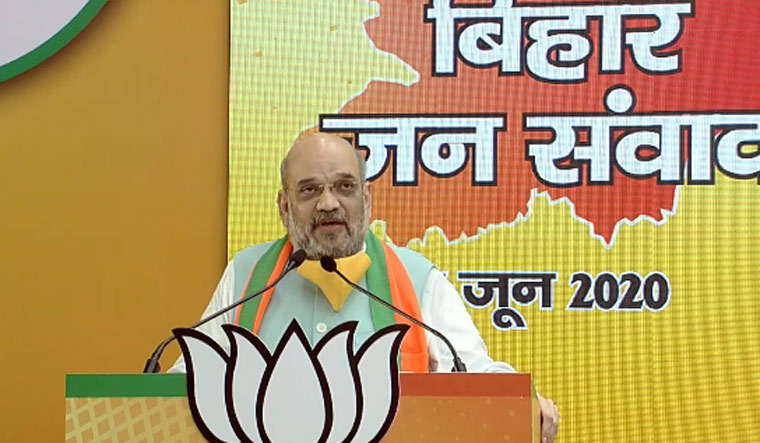 Sounding the poll bugle for Bihar Assembly elections, Union Home Minister and senior BJP leader Amit Shah on Sunday addressed a virtual rally of the party workers from the state amid the novel coronavirus pandemic.

Listing the achievements of the Narendra Modi government and attacking the opposition for “doing politics” over the COVID-19 crisis, Shah said the NDA will get two-third majority under Chief Minister Nitish Kumar's leadership in Bihar elections slated for October-November.

“Bihar's growth rate was 3.9 per cent when the RJD was ruling the state; it has now reached 11.3 per cent under Nitish Kumar. The state has moved from 'lalten raj' to 'LED raj',” said the former BJP president.

At the same time, the former BJP president asserted that this rally had nothing to do with Bihar poll campaign and was aimed at connecting with people during the fight against COVID-19.

“This rally is aimed at connecting people with 'Aatmanirbhar Bharat' campaign. The BJP will have 75 such meetings,” he said.

Giving out a detailed recap of the central government's performance, Shah said the issues which no one dared to touch in the last 70 years were resolved in the first year of Modi government's second term.

“There was a time when anybody used to enter our borders, behead our soldiers and Delhi's darbar remained unaffected. Uri and Pulwama happened during our time. It was the Modi government which did the surgical strikes and airstrike,” he said.

Lauding India's defence policy, the home minister claimed that after the US and Israel, India is the only country that is able to protect its borders.

Shah said the government had taken effective measures to tackle the issues of migrant workers in the wake of the COVID-19 crisis, and claimed that around 1.25 crore migrants have been safely brought to their places.

“When all arrangements were made and quarantines centres were set up, trains were run from 1st May. They were named 'Shramik trains' as a tribute to the migrants. Around 1.25 crore migrants have been safely brought to their places by the Modi govt,” he said.

Shah said 85 per cent of the cost of their travel was borne by the central government and 15 per cent by the state governments.

He said though the opposition leaders dismissed Prime Minister Modi's efforts to unite the country in the fight against COVID-9 as political propaganda, but the nation stood with him and followed his appeals.

Taking a dig at the RJD which had protested against his virtual rally by beating utensils, Shah asked if anyone had stopped them from holding a rally, and added they were relaxing in Delhi.

Earlier,  hours before Shah's virtual rally, RJD leaders and workers staged protests, beating utensils and blowing conches against what their leader Tejashwi Yadav dubbed as the ruling party's celebration of the devastation caused by COVID-19 and the lockdown.

A large crowd gathered outside the 10, Circular Road, residence of former Bihar Chief Minister Rabri Devi, where she stood alongside Tejashwi and her elder son Tej Pratap Yadav and party workers—all clanging steel plates with spoons—while standing inside circles drawn on the ground to ensure social distancing.

Huge police contingents were deployed at the protest site, a stones throw from the official residence of Chief Minister Nitish Kumar, and also the house of state health minister Mangal Pandey, a senior BJP leader who has been drawing flak from the opposition for alleged poor handling of the pandemic.