Ten modified coaches with 160 beds has been deployed in Delhi 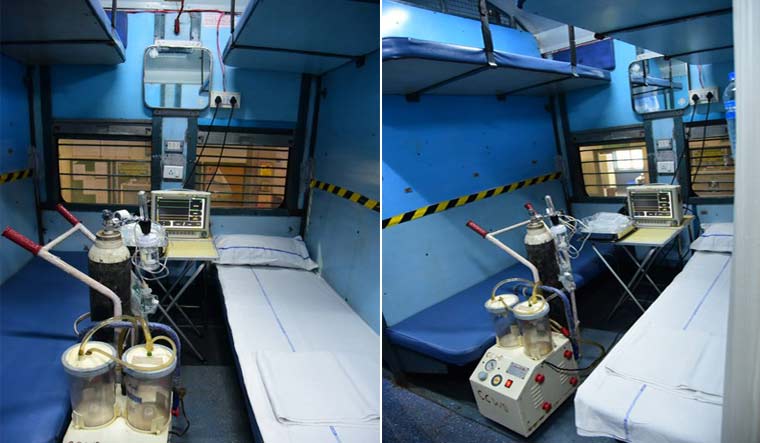 [File] A prototype of an isolation ward, ready with medical facilities, arranged in a train in Kamakhya in Assam | Twitter/ Piyush Goyal

After almost two months of lying unutilised, the railways' first COVID-19 care centre consisting of 10 modified coaches with 160 beds has been deployed in Delhi, officials said on Monday.

These coaches have been stationed at the maintenance depot of the Shakur Basti railway station in Delhi.

In addition to the 10 non-AC coaches with 160 beds, the COVID-19 care centre will have three AC coaches, a railway official clarified, for healthcare staffers, including doctors.

Earlier, the government had earmarked 215 railway stations for the deployment of isolation coaches to be used as COVID Care Centres for suspected or confirmed patients categorised as mild or very mild cases. Shakur Basti is one of those stations.

Sources said that initially there was a request to deploy these rakes at New Delhi or Hazrat Nizamuddin station, but the railways rejected it as special trains were being run from these two locations.

Now, the coaches have been deployed at the maintenance depot at Shakur Basti on Sunday and the special secretary of the Delhi government has been intimated about it, officials said.

A senior official said that a team of the Delhi government has inspected the coaches and are likely to give a report soon.

The national capital is among the worst hit by the COVID-19 pandemic in the country with nearly 20,000 cases.

These coaches are the first of the 5,321 coaches which have been converted into isolation wards by the railways for the treatment of coronavirus patients.

The train coaches have all the necessary medical equipment such as oxygen cylinders, blankets, medical supplies, sterilized berths for the safety and convenience of the individuals placed in isolation.

According to the Railway Ministry, these coaches-turned-isolation wards will be equipped with mosquito nets, charging points for laptop and phones. The toilets also have been modified into bathrooms.

These coaches have been modified at a cost of Rs 2 lakh each. Some of these coaches were ready for deployment by April 11, officials said.