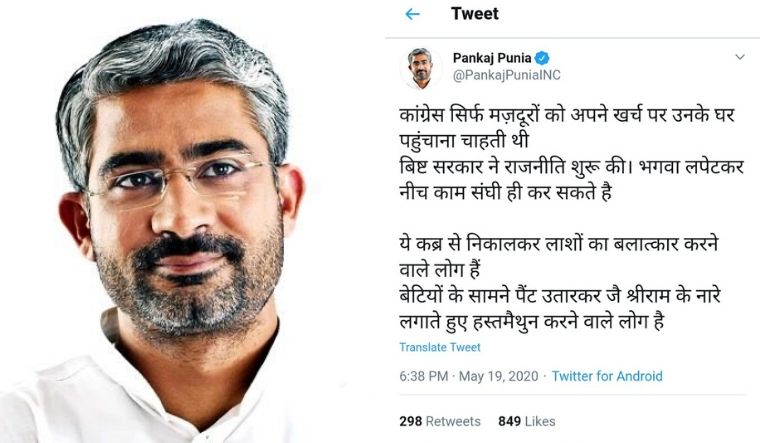 Pankaj Punia and a screenshot of his now deleted tweet

Congress leader from Haryana Pankaj Punia has been arrested by police in Karnal for allegedly "hurting religious feelings" through a social media post, a police official said on Thursday.

Punia, a former secretary of Haryana Pradesh Congress Committee, was arrested late Wednesday night following a written complaint by a Karnal resident at Madhuban police station that he allegedly "hurt religious feelings" and "promoted enmity between different groups on ground of religion" through his tweet, the official said. "Pankaj Punia was arrested from Madhuban area," Station House Officer, Madhuban police station, Inspector Tarsem Chand said. A similar complaint against Punia, also a member of the All India Congress Committee, was registered on Wednesday by the Uttar Pradesh Police.

On Tuesday, Punia in his tweet in Hindi had targeted the Yogi Adityanath government in Uttar Pradesh, referring to the politics over plying of buses by the Congress for ferrying migrants.

Taking to Twitter, the Haryana Congress leader wrote, "Congress just wanted to help migrant workers reach home, and was willing to spend money for it, but the ‘Bisht’ government started politicising the matter. Only Sanghis wearing Bhagwa (saffron) can do such neech (lowly, disgraceful) activities.

An FIR was registered against Punia at the Hazratganj Police Station in Lucknow for his alleged objectionable tweet. Chand said in the case registered in Madhuban police station, Punia has been booked under IPC sections related to promoting enmity between different groups (153 A), outraging religious feelings (295 A), public mischief (505-2), and Section 67 of the Information Technology (Amendment) Act 2008.

In his complaint, the complainant has alleged that "one person namely PankajPunia@INC has posted provocative falsehoods to promote enmity between sections of society on ground of religion and his acts are prejudicial to maintenance of harmony".