The current domestic production of PPEs per day is around 1.87 lakh 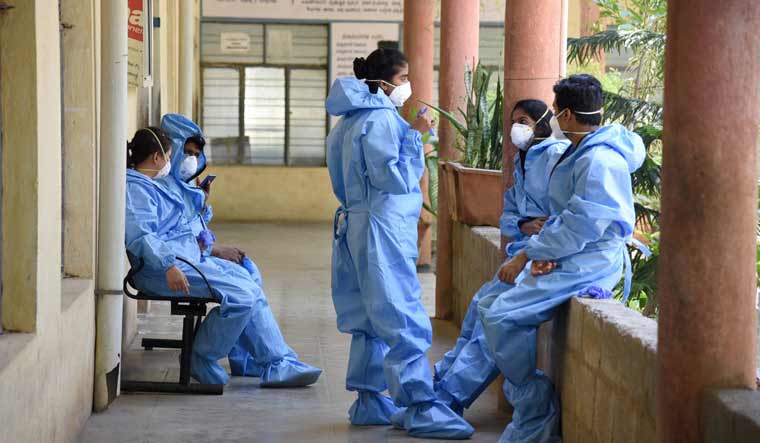 India has ramped up production of COVID-19 protective gears and medical equipment, giving a boost to its fight against novel coronavirus and reducing dependency on foreign countries for these items which are in high demand globally due to the pandemic.

The Centre on Friday said it has ordered for 2.22 crore personal protective equipment (PPE), of which around 1.42 crore will be bought from domestic manufacturers and the rest imported.

Addressing a press briefing on the COVID-19 situation in the country, P D Vaghela, chairman of one of the 11 empowered groups constituted for planning and ensuring implementation of response to the disease outbreak, said against the projected demand of around 2.01 crore PPEs, orders have been placed for more than 2.22 crore such equipment.

"Earlier, there was no domestic manufacturing of PPE in the country and almost all of them were imported. Now, we have 111 indigenous manufacturers. PPE production capacity has increased so much that it has become a Rs 7,000-crore industry in India, the biggest after China," said the Empowered Group-3 chairman who is also the secretary in the department of pharmaceuticals.

According to the government, the current domestic production of PPEs per day is around 1.87 lakh.

Vaghela said about 19,398 ventilators are available in India and orders have been placed for 60,884 more. Of these, 59,884 will be produced indigenously, he said.

The Health Ministry has indicated a projected demand of 75,000 ventilators till June.

He said of the total 2.49 crore N-95/N-99 masks ordered, 1.49 crore have been ordered from domestic manufacturers and about one crore N-95 masks are being imported.

About production of drugs and other medical equipment, Vaghela said, "Hydroxychloroquine production has increased from 12.23 crore to 30 crore per month". He also said that over 4 lakh oxygen cylinders are available which is "sufficient for today's requirements".

"Orders for more than 1 lakh oxygen cylinders have been placed and industrial oxygen is being converted into medical oxygen," he said.

He also informed reporters that against a demand for 35 lakh combined RT-PCR testing kits, the ICMR has ordered more than 21 lakh kits and close to 14 lakh have already been received.

"The required medical supplies were largely imported," he said.

The strategy devised was to see this as an opportunity to create supply chains and manufacturing in India by helping existing producers to expand, and identify new manufacturers.

Joint Secretary in the Ministry of Health Lav Agarwal said all districts of the country have been divided into red, orange and green zones based on COVID-19 cases reported from there and stressed that district administrations should ensure breaking of the chain of transmission through effective and stringent containment measures.

He said red and orange zones have been defined in such a way to ensure that no critical area of intervention at the field level is missed out. "Ruthless containment measures to break the chain of transmission will be taken in red and orange zones," Agarwal said.

Besides the number of cumulative cases and doubling rate, "density of population, testing ratio and the likelihood of an area posing a challenge for us later have also been considered while classifying districts into red and orange zones", he said.

"The biggest challenge is not whether a district is in the red or orange zone but if the containment measures are being properly followed so as to curb the spread of the virus," Agarwal said.

The containment zones can be residential colony/mohallas/municipal wards or police station area/municipal zones/towns etc in urban areas as appropriate. In case of rural areas, zones can be avillage, cluster of villages or group of police stations or gram panchayats among others.

"In containment zones, stringent perimeter control, active search for cases through house-to-house surveillance by special teams formed for the purpose, testing of all cases as per sampling guidelines, contact tracing and clinical management of all confirmed cases need to be done. In buffer zones, extensive surveillance through monitoring of ILI/SARI cases in health facilities needs to be done," he said.

The Health Ministry has listed 130 districts in the country in red zone, 284 in orange zone and 319 in green zone on the basis of COVID-19 incidences, doubling rate, the extent of testing and surveillance feedback.

This classification of districts is to be followed by states and UTs till a week post-May 3 for containment operations. The list will be revised weekly or earlier and communicated to states for follow-up action.

Metropolitan cities like Mumbai, Delhi, Kolkata, Hyderabad, Pune, Bengaluru and Ahmedabad have been designated as red zones in the new classification.