COVID-19: Shops in Gujarat allowed to open from Sunday, but not in malls

No shops will open in six wards in Ahmedabad, the worst COVID-19-hit city in Gujarat 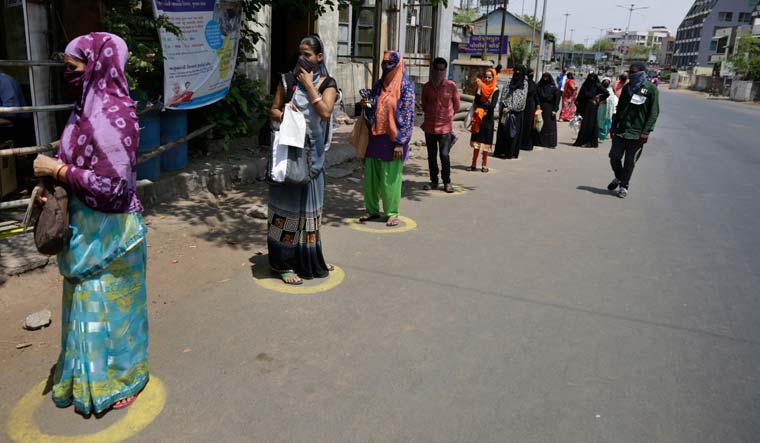 People stand in queue outside a fair price shop during lockdown, in Ahmedabad | AP

Starting Sunday, all the shops in Gujarat, except those located in COVID-19 containment zones, malls and shopping complexes, will be allowed to open, a senior official said on Saturday.

No shops will be open in six of 48 wards in Ahmedabad, Gujarat's worst coronavirus-hit city, as these are part of the containment zones.

"Six out of 48 wards in Ahmedabad city have been declared cluster containment zone, including four in central zone and two in south zone. Shops will not open in these six wards. The relaxations will be implemented in other areas with some restrictions. Teams will check if social distancing norms are being maintained and everyone is wearing masks," an official said.

The state government also allowed IT and ITeS (IT enabled services) companies to start their operations from Sunday with 50 per cent of staff capacity, provided they are located outside the containment zone, the official said.

"From Sunday, shops across all the districts of Gujarat will be allowed to open provided that they are not located inside malls or shopping complexes, and are outside of COVID-19 containment zones as identified by the local administrations," Secretary to chief minister, Ashwani Kumar, told reporters.

Shopkeepers and their staff members should use face masks, follow social distancing norms, and keep staff strength to 50 per cent of their capacity, he said.

"The decision has been taken on the basis of circular issued by the central government," he said.

"Shops will be allowed to open on a few conditions. The first condition is that they should be outside the containment zones identified by the local authorities. The other condition is that masks and social distancing will have to be compulsorily followed by the shop owners and staff members. Shops should maintain 50 per cent of its regular staff strength," he added.

Kumar said that shops selling paan masala and tobacco will not be allowed to operate as of now. Similarly, barber shops will not be given permission to function.

"The state government also allowed IT and ITeS companies to start operating from Sunday with 50 per cent of staff capacity provided they are located outside the containment zone," he said.

The Union government on Friday night issued an order saying that neighbourhood and standalone shops, including those selling garments, mobile phones, hardware and stationery items have been allowed to open but those located in market places, malls and COVID-19 hotspot and containment zones, will continue to remain shut till May 3.

The lockdown was first announced by Prime Minister Narendra Modi on March 24 in a bid to combat the coronavirus endemic. It was further extended till May 3.