Smart City grids are being used for providing telemedicine and counselling 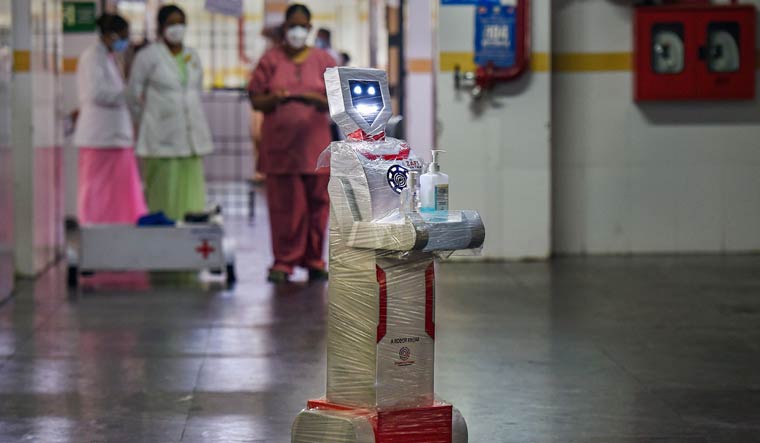 Medical staff participates in a demo of the interactive robot 'Zafi' which will be deployed at COVID-19 isolation wards, at Stanley Medical hospital in Chennai | PTI

During the first tenure of Narendra Modi's rule, there was a lot of noise about his ambitious Smart City Mission. As cities competed with each other to be included in the 100 Indian cities that would smarten up, people sat up and took notice of the projects they had proposed. Over time, though, media and public enthusiasm about smart cities faded away.

The Ministry of Housing and Urban Affairs (MoHUA), however, now reveals that Smart City infrastructure has become an important tool in the fight against COVID-19. Cities are developing predictive analytics using heat maps and taking action in monitoring the movements, using geo-fencing, as well as periodic health status of suspected cases.

The Nagpur Municipal Corporation, for instance, has launched a coronavirus app for the benefit of symptomatic citizens. The users have to enter their symptoms into the app, which then detects whether they are likely COVID-19 cases or not. In case of identified symptoms, the app informs a team of municipal doctors for further action. This simple app goes a long way in not just allaying tensions of people, but also in screening out them and thus reducing the load for the health workers.

In Gandhinagar, a team of medical experts hold regular video conferences with people in quarantine, or suspected patients. The city's municipal corporation also lists every grocery store in the city, so that residents can place their orders by phone. Likewise, Kota Smart City does remote digital medical consultations. New Town Kolkata runs telemedicine centres through Skype.

In Chennai, a team of 25 doctors are engaged in the Integrated Command and Control Centre (ICCC) and each doctor has been given 250 quarantined people to handle. These doctors reach out to them with moral and psychological support. In Vellore, 118 suspected patients are mapped with individual health experts for advice.

In fact, across urban India—from small towns like Sagar and Satna to metropolises like Chennai and Kolkata—Smart City grids are being used for providing telemedicine and counselling and also for coordinating daily requirements.

According to the ministry, with social distancing a key measure to fight this contagion, telemedicine has emerged as an important technology.

“The guidelines issued by the Ministry of Health and Family Welfare in collaboration with Niti Aayog and Indian Medical Council allow remote delivery of medical services during the lockdown period. The guidelines allow doctors to write prescriptions based on telephomic, textual or video conversations ... Citizens can therefore consult certified medical practitioners without the need to go out of the house.... ''