Northeast people are facing increasing harassment and violence over their looks 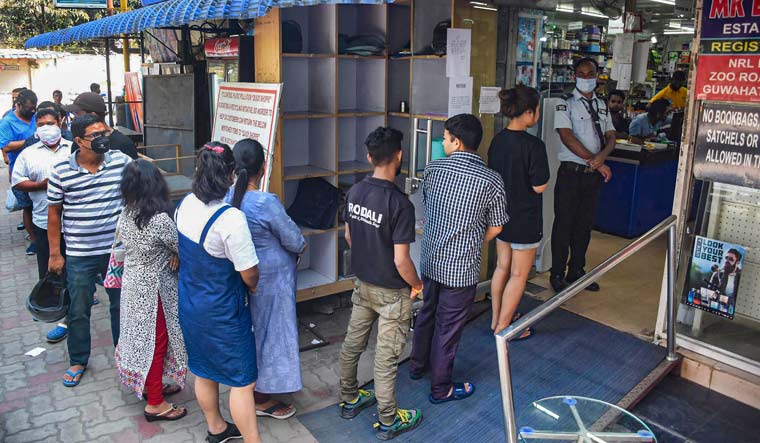 Locals stand in a queue to buy vegetables and essential commodities after government ordered lockdown amid coronavirus pandemic, in Guwahati | PTI

Even as China battles global Sinophobia over COVID-19—since the disease was first reported from Wuhan—in India, people of the northeast are facing increasing harassment and violence over their looks. Kiren Rijiju, minister for sports and youth affairs, who hails from Arunachal Pradesh, has asked state governments to sensitise residents against such stigmatisation.

A New Delhi-based organisation, Rights and Risks Analysis Group (RRAG), has brought out a report documenting the harassment that people from the northeast are facing as the pandemic rages across the world. The report, called Coronavirus Pandemic: India's Mongoloid Looking People Face Upsurge of Racism, documents 22 reported cases of hate and racial discrimination between February 7 and March 25.

Violence against and stigmatising of people from the northeast, who come to metros for studies and employment, is not just a corona phenomenon. It has been latent in the country and every once in a while takes a very ugly form. However, in the last couple of years, reports of such incidents had come down with the administration and civil society working hard at sensitising locals. Delhi Police is even recruiting people from the seven sister states into its cadres for greater assimilation and sensitisation.

“These incidents are just the tip of an iceberg as India’s Mongoloid looking people have been facing discrimination on a daily basis and the same do not make news,”said Suhas Chakma, RRAG director.

He said that people from these states were being slandered with terms like “corona”, “Chinese”, “chinki”, being spat at and forcibly quarantined even though they showed no symptoms. They have been denied entry into apartment complexes, forced to evict their flats, and even asked to leave restaurants (before lockdown) as their presence was making others uncomfortable, Chakma said.

The report cites the case of a Manipuri woman who was returning home in Delhi on March 22 when a man passed lewd comments. When she protested, he allegedly called her 'corona' and spat pan juice on her. He was subsequently arrested.

Another case was of Rinzin Dorjee (74) and his daughter Tsering Yangzom who were reportedly denied entry to a Mulund society in Mumbai on March 16 as residents thought they were Chinese.  Dorjee, a cancer patient, had a rented apartment in the society, but that day, he was stopped by the security guard as they thought he might be infected with corona, reports say.

Even Chinese origin actor Meiyang Chang was not spared and he had taken to social media to express how he was hurt at being called nasty names.

Chakma said that the Ministry of Home Affairs had issued an advisory on March 21 to take “appropriate action against cases of harassment of people from the north east”. He, however, said that in the absence of a law against racism and racial discrimination in India, such an advisory was inadequate.

Police usually invoke Section 354 of the Indian Penal Code (assault or criminal force to woman with intent to outrage her modesty) and Section 509 (insult to the modesty of women) if the victim is a woman, but there are no provisions when the victim is a male, he said, adding that the usage of nasty and racially abusive terms such as “momo” and “chinki” are not defined as offences under the Scheduled Castes and Scheduled Tribes (Prevention of Atrocities) Act of 1989.

Further, not all Mongoloid looking people, such as the Meitis or Tibetans, are listed as Scheduled Tribes to be covered under the Prevention of Atrocities Act. “The police are at loss over which sections or which laws to invoke given the legal vacuum against acts of racism and racial discrimination,” he said.