However, India's strategy has evolved with the disease spread 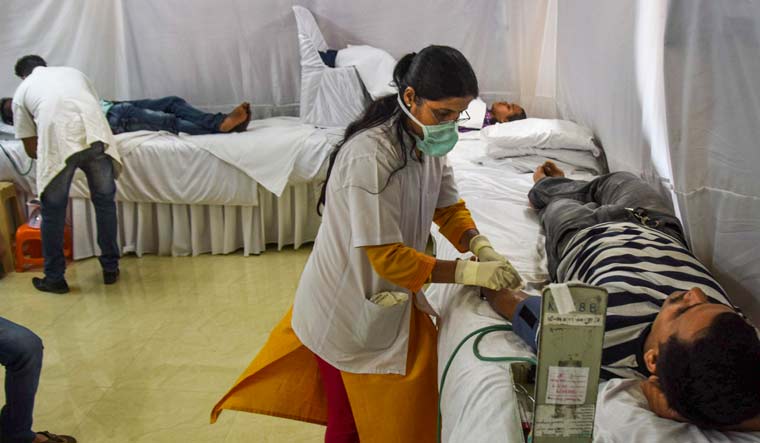 Volunteers donate blood at at a camp organised at Lalbagcha Raja Society premises to support coronavirus patients, in Mumbai | PTI

As the coronavirus infections surge, reports have highlighted the low number of tests carried out in India. An Indian Council of Medical Research (ICMR) report, as of March 23, has put the total nimber of individuals tested for COVID-19 at 92 state-run labs across the country as 17,493. Compare that to South Korea. As of the same week, they had tested 2,90,000 carrying out out more than 5,500 tests per million people. Italy, in the same time period, had more than 2,500 per million. India lags at just 10 tests per million. The United Kingdom had performed close to 1,500.

However, as the cases had developed, India had expanded its testing strategy to include “asymptomatic direct, high-risk contacts of confirmed cases should (also) be tested once between day 5-14 of coming in contact”.

All private laboratories which have NABL accreditation for real-time PCR SA for RNA virus will be allowed to conduct COVID-19 tests. The National Task Force recommends that the maximum cost for testing should not exceed Rs 4,500. This may include Rs 1,500 as a screening test for suspect cases and an additional Rs 3,000 for confirmation test, the guidelines said. The government has also directed private laboratories to settle a ceiling of Rs 4,500 for every test prescribed by a doctor or a physician.

The US now has more coronavirus cases than any other country after more than 16,000 COVID-19 infections were reported there in a single day, taking the number of patients in America to over 85,600, according to Johns Hopkins University data. Globally, a total of 24,057 people have died due to the novel coronavirus with Italy standing at the top with 8,215 deaths,  followed by Spain (4,365) and China (3,169), the varsity figures stated.

America leads with 85,653 COVID-19 cases, followed by China with 81,782 and Italy with 80,589 infections, the data showed. According to Worldometer, the website that records confirmed cases of infection and deaths globally, the US had 85,088 individuals infected with coronavirus, of which 16,877 were added just in a single day. A week ago, the number of confirmed cases were 8,000. It has dangerously surged 10 times in the span of a week.

With at least 263 deaths, the US also reported most number of fatalities due to the contagion on a single day on Thursday. At least 1,290 Americans have died due to coronavirus so far, the website reported.

Over 2,000 coronavirus cases were reportedly in a serious condition. The number of confirmed cases as well as the deaths due to COVID-19 are likely to increase substantially in the coming days. In China, where the outbreak originated in December, 3,287 people have died due to coronavirus pandemic while Italy has recorded 8,215 such deaths.

US President Donald Trump attributed the spike in the confirmed cases to the large-scale testing of the deadly disease. "I think it's a tribute to our testing," he said, adding "no one knows what the numbers are in China".

In an in interview with the CNN, Anthony Fauci, America's top infectious disease expert said it was difficult to tell where the pandemic will go and how long it will last in the US.

This is the relative percentage of asymptomatic infection  and it "influences everything," he said. It influences transmission, contact tracing, and the measures that the authorities need to take. That's why the most important thing to do now is to conduct widespread testing and collect more data, he asserted. He called for ratcheting up the current level of contact tracing and testing. "We've got to do it better than we are now," he said.