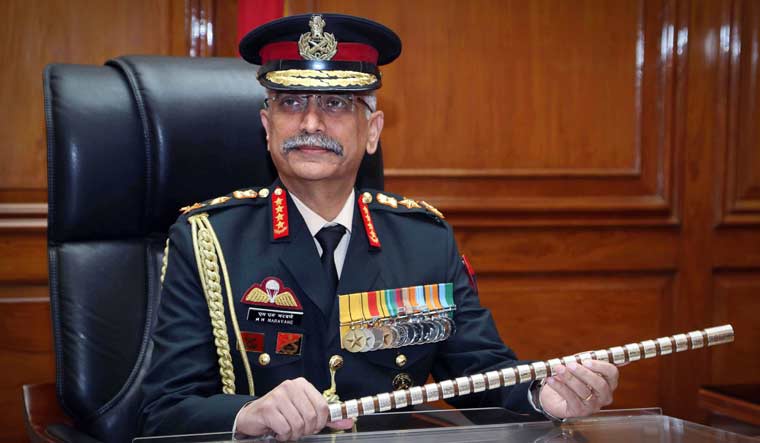 Reiterating the mantra of "Say no to panic, Yes to precaution" Army Chief General M.M. Naravane, on Friday, said the world's third-largest army has a contingency plan in place and so the spread of COVID-19 will not affect the core efficiency of the  Indian Army.

"It is the earnest responsibility of Indian Army to keep the borders safe while the country is preparing to fight COVID-19. So, the Indian Army is undertaking its operational task like before and there is no effect on operational preparedness," he said, adding that the Army's focus is to combat COVID-19 aggressively by taking precautions, following lockdown and curfew measures and preparing resources for the future.

General Naravane said the responsive and agile Quick Reaction Medical Teams (QRMT) are on standby to be mobilised at six-hours notice to meet any requirement of civil administration.

Borrowing from military lingo, the Army chief said at present, COVID-19 is in the preparatory stage of the impact of India, but warned that "next few weeks will be crucial to prevent negative effects of this deadly mutant virus as we are making concerted efforts to prevent the virus from establishing a firm base."

The Army has taken several preventive measures to contain the spread of coronavirus, including setting up isolation wards at peripheral hospitals in formations along the LoC with Pakistan and Line of Actual Control on the China border. Army personnel have been asked not to extend leaves, and leaves have been limited to minimum days. Segregation facilities have also been set up to observe troops  already back from their home states after holidays.

Director-General of Armed Forces Medical Services (AFMS) Lt General Anup Banerji has claimed that 28 military hospitals have been earmarked as COVID-19 hospitals for managing only coronavirus cases. "This will include armed forces patients as well as civilians transferred from state health authorities, in case their capacity is overwhelmed," Lt Gen Banerji said.

He admitted that the availability of personal protective equipment (PPE) is a challenge , both at national as well global level. "At the moment, AFMS is geared up with adequate PPEs for use in our hospitals. Additional procurement is also being planned to tide over crisis foreseen during the coming weeks since the armed forces have been directed to augment medical resources for the civil health set up as well. Their rational usage is very crucial and we have issued necessary advisory to that effect to the Services," Lt Gen Banerji said.

He also disclosed that apart from the Maldives, a team of military doctors is ready to be dispatched to Nepal for assisting the neighbouring nation with the situation.

Currently, six military-operated quarantine facilities are operational at Hindon, Manesar, Jaisalmer, Jodhpur, Ghatkopar and Chennai and are housing 1,059 civilian evacuees from a country like Italy, Iran and Malaysia. Of these, three have been tested positive for COVID-19 so far.