Masks make debut in Rajya Sabha, Chairman objects to it saying 'it is against rules' 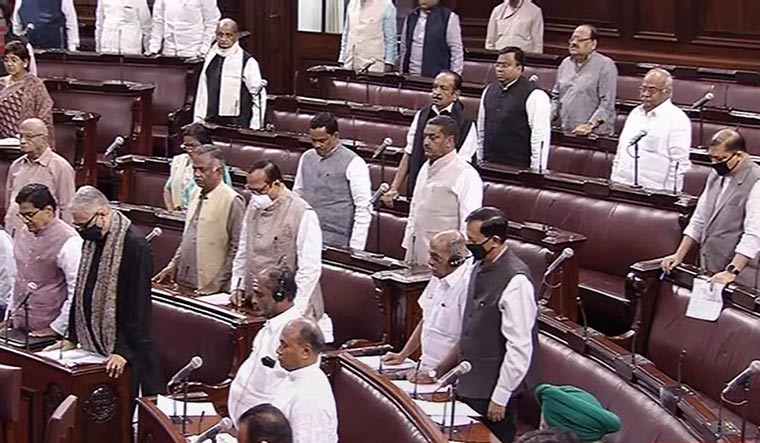 Opposition Rajya Sabha members on Wednesday demanded curtailment of the ongoing Budget session, which is due to end on April 3, in view of the novel coronavirus scare, but the government seemed unwilling.

In a first, the Rajya Sabha saw a few members wearing face masks as protection against the coronavirus, but the same was objected by chairman M Venkaiah Naidu who said it was against the rules to wear any masks inside the House.

Four Trinamool Congress (TMC) MPs came to the House wearing face masks. The party's MP Derek O'Brien wore a black colour mask while his deputy Sukhendu Sekhar Ray, who said they were following the government advisory in wearing the masks, wore a white one.

However, when senior Congress leader P. Chidambaram urged Naidu to allow MPs to decide on using protective gear depending on their perception of vulnerability, the Chair agreed.

Congress and other opposition MPs suggested that the Budget session be curtailed to practice social distancing being advocated by the government to limit the spread of COVID-19.

While Congress' M.V. Rajeev Gowda urged the government to either curtail or postpone the remaining sittings of the Budget session, his party colleague Anand Sharma said the government was preaching social distancing but is not following it in Parliament.

"It is a matter of concern that when we are advising everyone to practice social distancing, Parliament is continuing to function. We should be setting an example to the rest of the country and preventing it," Gowda said. "We meet people from everywhere across the country and we are probably most at risk within Parliament, and the house of elders with extremely senior people are also at risk," he said.

Sharma said while the entire country is being asked to practice social distancing, "if we do not do it here, it does not make any sense."

Minority Affairs Minister Mukhtar Abbas Naqvi, however, opposed any curtailment saying the house has to show the resolve to fight the infection. "Showing any panic will not be in the national interest."

He went on to quote Prime Minister Narendra Modi for the need to show resolve to fight the coronavirus.

Naidu said the entire Parliament complex has been sanitized and hand sanitizers have been kept at various places.

"I cannot simply respond to you on my own behalf. After all, it is the decision of the government and then of the House," he said on pleas for curtailing the session.

Two sanitizers were also placed inside the House as well.

Immediately after reading out the obituary reference to the passing away of former member Puttappa Patil, Naidu said no masks are allowed in the House and asked four TMC members, who were wearing them, to go out and remove them.

"No masks are allowed inside the House. Please remove. You are all senior members and you know the rules, regulations about the conduct of the house. Please. Otherwise, you know what I will do," he said.

Naidu said the rules do not allow members to sport masks in the House and "it will be difficult to conduct" proceedings.

"Members, I have already made an appeal that the members who are wearing masks, may please go and remove it. Otherwise, it is difficult to conduct the house. And, then people will start doing other things also," he said.

At this point, Chidambaram rose to state that the issue should be left to the judgment of individual members.

He said any member feeling vulnerable should be allowed to wear face masks.

"I appreciate your statement that as far as possible, members should not wear a mask inside the House. But, this is a matter which should be left to the judgment of individual members, whether he feels vulnerable or not so vulnerable," he said.

"If you impose a standard and say, nobody should wear a mask, I think that is not fair," he said.

Chidambaram requested that the house proceedings continue by letting the members who feel vulnerable to wear the masks.

"There are three or four members who feel vulnerable enough to wear a mask. Let them wear the mask as long as they sit here," he said.

"But, I think it is unfair to ask a member to leave the House just because he is wearing a mask," the Congress leader said.

Naidu accepted his argument but said the House was setting a precedent.

"I want all these things to go on record. That is all. We are setting a precedent," he said.

"I have no problem personally, if members feel vulnerable, as Chidambaramji has said, and they make their own preventive arrangements," Naidu said.

He said MPs can make suggestions on further strengthening measures in the Parliament House complex to check the spread of coronavirus.