Health Minister K.K. Shailaja said there were 10,994 people under observation 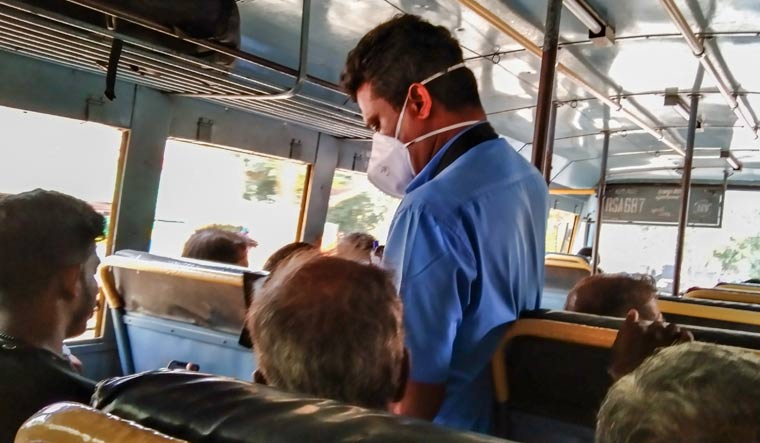 Two people, including a UK national, tested positive for COVID-19 in Kerala on Sunday, taking the total number of affected to 21 in the state as the government launched a "break the chain" initiative to prevent the spread of the virus.

"With the two new cases, the total number of infected persons has gone up to 21. All of them are stable.

“We expect the flow of foreigners to the state to reduce in the coming days," Health Minister K.K. Shailaja told reporters.

She said the state expects "our brothers who are working abroad for their livelihood" to return to Kerala and added that the department was gearing up to receive them.

The minister said there were 10,994 people under observation across Kerala, of whom 289 have been lodged in isolation wards in various hospitals.

She also said 10,655 people are under home quarantine.

A total of 2,147 blood samples were sent for testing, of which 1,514 results turned out to be negative.

The minister said health volunteers and police would inspect those who are in home quarantine to ensure that they remain under isolation.

The health department also launched a "breaking the chain" campaign to encourage hand sanitizing among people in order to prevent the spread of coronavirus.

"There are chances of the virus being spread through our hands. Sanitizing our hands will break the chain and prevent the spread of the virus.

“We must use hand sanitizers or wash the hands with soap and maintain personal hygiene. We need to spread awareness on hand hygiene campaign," the minister said.

Earlier in the day, a UK resident was offloaded from a Dubai flight after the state government informed the airport authorities that he had tested positive.

He was stopped along with 18 others of his tourist group at Kochi airport from flying to Dubai after he allegedly jumped quarantine in the hill resort town of Munnar, officials said.

The foreigner who tested positive and his wife have been admitted to an isolation facility at a nearby government hospital while the 17 were sent to a hotel for quarantine after being offloaded from the flight, state minister V.S. Sunil Kumar told reporters at the airport.

The flight carrying 270 passengers left for Dubai at 12.47pm after the 20 passengers were offloaded, an airport spokesman said.

The officials closed down the resort, quarantined its employees and steps were taken to identify those who came in contact with the tourists in the state, officials said.

Shailaja dismissed the charge of lapses on the part of the authorities, resulting in a coronavirus positive patient travelling all the way to Kochi airport from Munnar, a distance of over 100km.

"There are certain protocols in confirming the positive cases. We had earlier itself instructed the resorts not to let the foreign guests out of the resort.

“But the tourists left without informing the health officials. The chief minister has already sought a report on the matter," she said.

She said the incident was an "experience that the state has not faced before" as the government was "dealing with a never-before situation".

Meanwhile, with an increase in the number of coronavirus cases, the Kerala government on Sunday launched intensified medical check up at 24 spots bordering Tamil Nadu and Karnataka for people entering the state by rail and road.

A team headed by a Deputy Superintendent of Police (DySP) began checking of vehicles coming to the state.

The National Health Mission State Mission Director (SMD) Rathan Kelkar told reporters that the response of the people toward the call for volunteers was "overwhelming".

"We needed additional volunteers for ensuring the medical checkups of passengers coming through the border. We have received many requests and will provide them appropriate training," Khelkar said.

With 21 confirmed cases of COVID-19, the state has enrolled volunteers to assist the health department after special training by officials.