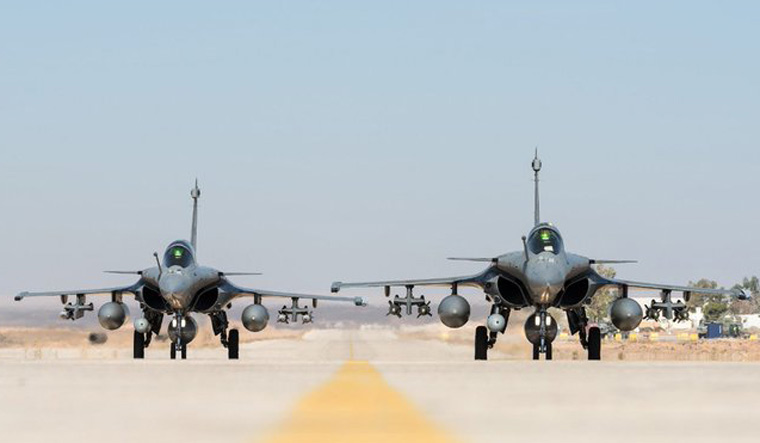 The ministry of defence is struggling to finalise the date for induction of the first four Rafale jets amid speculations of delayed delivery of fighter jets from France due to coronavirus threat.

Though Defence Minister Rajnath Singh last week claimed that the first four Rafale jets would land in India in the last week of May, the Air Force headquarters is yet to get confirmation from the French officials. Indian government on Wednesday suspended all existing visas, except diplomatic, official, UN/international organisations till April 15.

"As of now, no date has been finalised for the induction of Rafale jets into the IAF. We are yet to hear from Dassault Aviation about exact delivery date of the fighter jets," an official based in South Block, which houses the ministry of defence, said.

Ambala Air Force station, which will be home to the first four Rafale jets, is getting ready itself for the induction ceremony. Infrastructure facilities, including hanger bays, have been created in Ambala for the first squadron of Rafale jets named as 17 Squadron or the Golden Arrows. The second squadron of Rafale will be stationed at Hasimara base in West Bengal to counter the Chinese threat.

Due to travel restrictions, advance liaison team from France may also face some difficulty to come to India to make way for the induction.  France is the second most-affected European nation by the coronavirus as infected cases in the country have reached 2,284, while death toll got close to 50. Several cities of France, including Bordeaux—close to  Rafale jet fighter assembly line in Merignac— have reported coronavirus-positive cases.

At the moment, Indian pilots along with crew and technical team of the IAF are undergoing training in France. Besides, a Project Management Team of the IAF is already camping in France to oversea the manufacturing of fighter jets for India.  Nearly 50 people including 24 Indian pilots will be trained in three different batches till May 2020.

The first of the four jets will also have the tail no RB-01. As the then deputy chief of the air staff,  now air chief R.K.S. Bhadauria was instrumental in the Rafale fighter jet negotiations with the French government and Dassault Aviation and due to his involvement in the Rafale jet talks, his name initials 'RB' was inked on the first Rafale.

Rajnath Singh in October last year had performed a shastrapuja of the fighter jet during his visit to France. He also took a sortie in the jet. All four delivered jets will be equipped with over a dozen India-specific enhancements at a cost of around one billion euros.