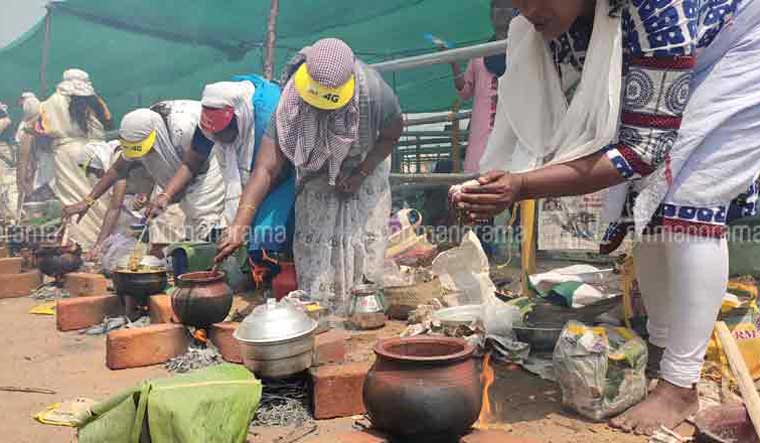 The Attukal Pongala celebration in Thiruvananthapuram | Via onmanorama

Six foreign nationals were forced to return from the Attukal Pongala site in Thiruvananthapuram on Monday after a sixth patient tested positive for novel coronavirus (COVID-19) in Kerala.

Devaswom Minister Kadakampally Surendran has warned that strict action will be taken against hotel authorities for allowing foreigners to leave their premises for Pongala, despite a strict warning issued by the state government. Notwithstanding the outbreak of COVID-19, the Attukal Pongala is under way at Thiruvanathapuram. The ten-day temple festival, which is being celebrated by lakhs of women at the Attukal Bhagavathy Temple in Thiruvananthapuram, ends on Monday.

State Health Minister K.K. Shailaja had said that Pongala could not be stopped as it was too late to issue any advisory for the same. Five people were tested positive for COVID-19 in Kerala on Sunday and one on Monday. As the first three coronavirus patients, who had tested positive earlier recovered from the illness, the state had decided to go ahead with the Attukal Pongala.

The health minister has suggested that self-discipline is the only precaution that could be taken. The minister said that those with even an inkling of a mild disease—say a sore throat or cough or a running nose—should keep away from the event that will witness a gathering of lakhs of women, considered the largest mobilisation of women for a single event in the world.

World Health Organisation (WHO) guidelines on COVID-19 state that crowded areas should be avoided, especially by those above the age of 60.

It is unofficially estimated that nearly 35 per cent of women devotees who come to Attukal for the Pongala are over 60.

“Those who had returned from foreign countries in the last two months should offer Pongala from their homes,” Shailaja said. She also said that the video footage of the Pongala would be taken as a precautionary measure.

“If at all anything goes wrong, we can use these video clippings to identify those who had come into contact with the infected person or persons,” the minister said.

The minister said that 23 health teams have been constituted. She said that 12 ambulances and five bike ambulances would always be at hand. She also said that many small teams, including that of residents' associations, would be deployed to various areas to look for devotees with symptoms of COVID-19. This could prove tricky as as most women devotees would be found coughing and sneezing because of the heat and fumes from the Pongala pots. Squads formed by residents' associations will look for women who had returned from a foreign country in the recent past. This measure, too, is seen as highly inadequate as women from all parts of the state and outside gather for the festival.

It is said that the travel history of at least 70 per cent of women who attend the Pongala on Monday would be hidden. Kerala health department sources said that a list of foreigners in the capital had been drawn up. Hotels and resorts in the city and outskirts were asked to provide details of foreigners who had checked in. Nonetheless, hotel and resort managers have been instructed to somehow dissuade foreigners, especially from high-risk places—like China, Italy, South Korea, Vietnam, Hong Kong, Thailand, Singapore, Indonesia, Nepal and Malaysia—from travelling to the city to witness the Pongala celebrations.