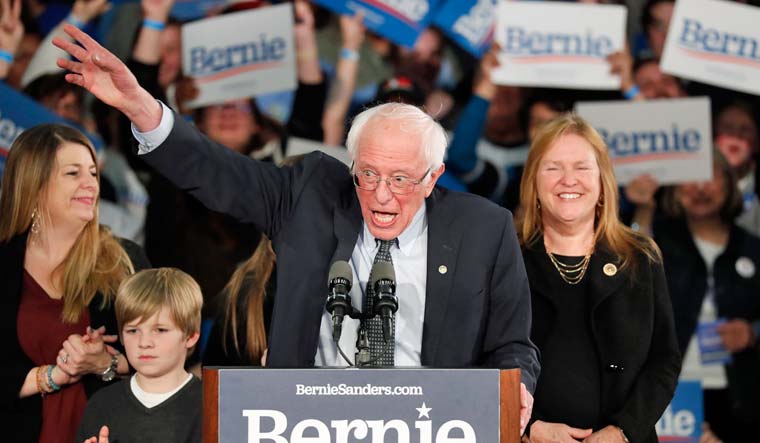 A day after US lawmakers reacted sharply to the violence in the Indian capital, Democratic presidential candidate Bernie Sanders here accused US President Donald Trump of failing on the issue of human rights.

Slamming the US president, Sanders said the Trump's statement regarding the violence in New Delhi during his India visit was a "failure of leadership".

Over 200 million Muslims call India home. Widespread anti-Muslim mob violence has killed at least 27 and injured many more. Trump responds by saying, "That's up to India." This is a failure of leadership on human rights.https://t.co/tUX713Bz9Y

Asked about incidents of violence during his India visit, the US president had said, "As far as the individual attacks, I heard about it, but I didn't discuss that with him (Modi). That's up to India."

Reacting to the issue, Sanders on Wednesday tweeted, "Over 200 million Muslims call India home. Widespread anti-Muslim mob violence has killed at least 27 and injured many more. Trump responds by saying 'That's up to India'. This is a failure of leadership on human rights."

Sanders is the second Democratic presidential nominee after Senator Elizabeth Warren to speak against the violence over the Citizenship Amendment Act in New Delhi.

Apart from the Democratic presidential candidate, other influential senators too expressed concern over the developments on Wednesday.

"We are alarmed by the recent violence in New Delhi. We continue to support an open dialogue on issues of significant concern in order to advance our vital long-term relationship," Senator Mark Warner from the Democratic Party and John Cornyn from the GOP said in a joint statement.

Warner and Cornyn are co-chairs of the Senate India Caucus, the largest country-specific caucus in the US Senate.

Congressman Jamie Raskin said he was horrified by the violence, which he sad was fuelled by religious hatred and fanaticism.

"Liberal democracies must protect religious freedom and pluralism, and avoid the path of discrimination and bigotry," the Congressman said. Richard N. Hass, who heads the powerful Council on Foreign Relations, said the reason for India's relative success has been that its large Muslim minority saw itself as Indian.

"But this is at risk, owing to govt attempts to exploit identity politics for political advantage," he said. Earlier in the day, the US Commission on International Religious Freedom urged the Government of India to take swift action for the safety of its citizens.

Expressing "grave concern" over the violence, the US body said the Indian government should provide protection to people regardless of their faith amid reports of attack on Muslims.