Inshallah there will be peace, says Doval, as uneasy quiet envelops violence-hit Delhi

In Jaffrabad, Doval gave word to a young girl that "everyone will be safe" 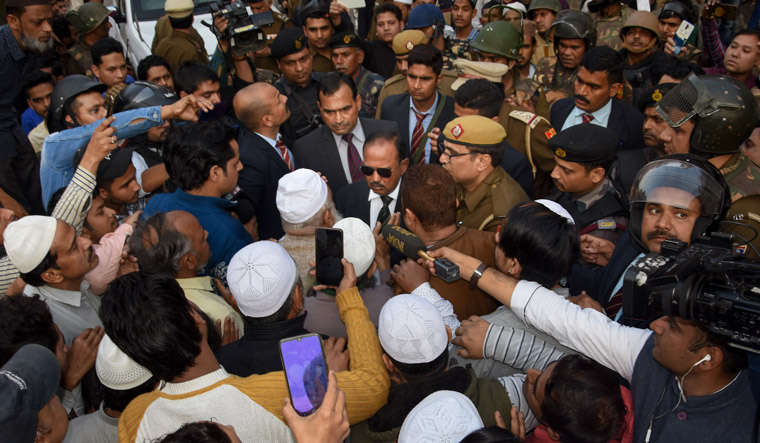 Just as the Delhi High Court expressed "anguish" over the Delhi violence, an uneasy quiet settled over parts of northeast Delhi. But there was unrest in some other locations with shops being set ablaze, and the body of an IB staffer found in a drain. The police conducted flag marches and security personnel spread out across the northeastern edge of the national capital in a bid to quell the violence raging since Sunday, Prime Minister Narendra Modi in his first reaction appealed for peace and brotherhood. Asserting that it was important for calm to be restored at the earliest, Modi said on Twitter, "Had an extensive review on the situation prevailing in various parts of Delhi. Police and other agencies are working on the ground to ensure peace and normalcy."

National Security Advisor Ajit Doval visited some violence-hit areas. "What has happened has happened. Inshallah, there will be complete peace here," he said as he walked through the mostly mixed neighbourhoods and congested lanes of northeast Delhi and met locals.  In Jaffrabad, a young girl walked up to him and said she does not feel safe in the area. She also blamed the police for "inaction" when the mob went on a rampage. To her, he said, "I give you my word. Everyone is safe here." Doval also asked police personnel to ensure that the girl reaches home safely.

The 75-year old Doval had undertaken a late night tour accompanied by Delhi Police Commissioner Amulya Patnaik, newly-appointed Special Commissioner S.N. Shrivastava and other senior officers. Shrivastava is believed to have been handpicked by Doval himself after Patnaik faced flak for failing to curb spiralling violence in the national capital in the backdrop of high-profile visit of the US president. The Delhi Police reports to the Union home ministry.

The former Intelligence Bureau chief, who holds the rank of a cabinet minister, visited the affected areas, including Jaffrabad and Seelampur, where he met police officers and gave them necessary directives, besides meeting leaders of different communities to assuage the tension, the officials said. Doval had, on Wednesday morning, presented his on the spot assessment of the situation to the Cabinet Committee on Security (CCS) headed by the prime minister about the steps taken to quell the violence and restore normalcy in areas under the grip of violence over the amended citizenship law.

During the visit, Doval said he was there on the instructions of Modi and Home Minister Amit Shah. "Police is working hard. Only some criminals were involved in this. One should try resolving issues and not increasing them. There were incidents earlier but today it is calm. Locals want peace. We have full faith there will be peace," he said.

Fear hung like a heavy cloud over the area, littered with the detritus of a riot—mangled and charred vehicles, bricks, stones and jagged glass. The Intelligence Bureau staffer, identified as Ankit Sharma, was found dead in a drain in Chand Bagh where he stayed. Sharma may have been killed in stone pelting, officials said. Shops and schools were closed and many streets deserted with police making announcements that no one should come out of their homes. Officials said the CBSE Class 12 English exam on Thursday has been postponed in the northeast and parts of east Delhi in view of the turbulent situation due to violence. There was heavy deployment of force in Chand Bagh with security personnel not allowing anyone to come out. The blackened walls of a 'mazaar' in the locality spoke volumes of the violence the day before.

Shops outside the mosque, belonging to Hindus and Muslims, were also set on fire. After two days of mobs roaming unchecked through the streets, looting shops and setting property on fire, the uneasy quiet was a respite.

Their livelihoods lost with their shops looted and their children in a state of panic after witnessing the bloodshed, many people were seen leaving their homes. Among them was a family that promised to be back, but said they did not know when.

At the GTB Hospital, many grieving family members were waiting to collect the bodies of their dear ones. Asked if the victims have been identified, GTB Hospital Medical Superintendent  said, "Many people have been identified, some are yet to be." He, however, declined to divulge the identity of the deceased. Patients have several kinds of injuries, including from gunshots, stones and other weapons and many were hurt while jumping from rooftops to escape the rioters, hospital authorities said.

The "gush" of injured patients had reduced to a trickle. The injured recounted horrific accounts of violence that they witnessed and how they managed to escape the deadly violence. Districts magistrates of northeast and Shahadra districts accompanied by senior officials of the Revenue Department and the Delhi Disaster Management Authority (DDMA) were also the hospital to take stock of the situation.

Holding the Centre and the Delhi government responsible for the violence—perhaps the first time since 1984 that the city has seen such scenes of communal mayhem—Congress president Sonia Gandhi called for the resignation of Home Minister Amit Shah. "The conspiracy was witnessed during Delhi polls and BJP leaders gave hate speeches creating atmosphere of fear and hatred," she said. The slugfest continued with the BJP, in turn, accusing Gandhi of politicising the violence.

"Violence is ending. Investigation is on to find out the truth and identify culprits... At such a time, attacking government and politicising violence is dirty politics," said Union minister Prakash Javadekar, adding that it also demoralises police. That was also a concern of Solicitor General Tushar Mehta who asked a Supreme Court bench not to make any adverse observations relating to the violence as it will demoralise the police force.

An apex court bench of justices S.K. Kaul and K.M. Joseph lashed out at law enforcing agencies for allowing the "instigators of violence" to get away and said they should act as per law without waiting for somebody's nod.