Balakot air strikes anniversary: The saga of Masood Azhar, the man who started it all 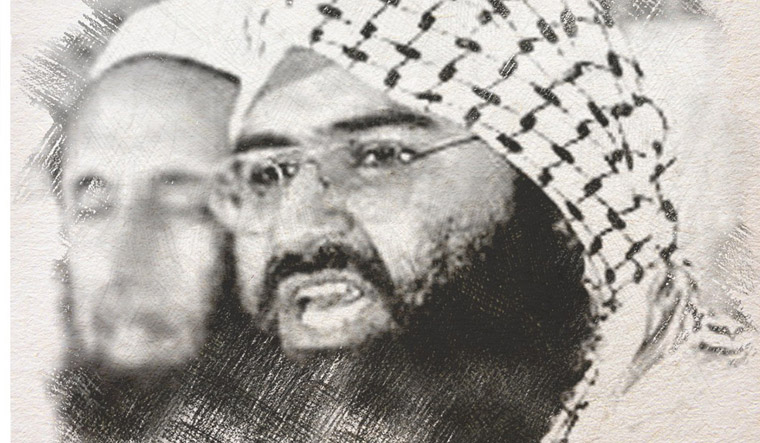 On February 14 last year, a convoy of vehicles carrying security personnel was attacked by a suicide bomber, affiliated to Jaish-e-Mohammed (JeM) terror organisation, at Lethpora in Pulwama district of Jammu and Kashmir. 40 Central Reserve Police Force (CRPF) personnel were killed in the attack. On February 26, 2019, in retaliation, at least a dozen IAF Mirage 2000 fighter jets crossed the India-Pakistan border to pound the biggest terror training camp of JeM at Balakot in Pakistan's Khyber Pakhtunkhwa, a move that forever redrew the boundaries of the war against Pakistan-driven cross-border terror.

The Syed Ahmed Shaheed training camp at Balakot was chosen after due care. The outskirts of the town had hosted one of the oldest terror training camps of Pakistan, then controlled by JeM.

Azhar himself had been at the Balakot facility on February 5, 2019, a few days before the attack, which was Kashmir Solidarity Day. He had been known to visit the place to give inspirational lectures, and he had entrusted the administration of the camp to his brother-in-law Yusuf Azhar, alias Ustad Ghauri, who is suspected to have masterminded the Pulwama attack. Azhar's earlier visit had been in October when he had offered a prayer for acceptance of the “martyrdom” of his 18-year-old nephew Usman (son of his elder brother Ibrahim Azhar), who had been gunned down by security forces in Tral in Kashmir. At the training camp, Azhar had urged Kashmiris to follow in the footsteps of Usman. Adil Ahmad Dar, the Pulwama fidayeen bomber, is said to have been inspired by that speech, which was circulated on social media. And Yusuf Azhar, who had been trained at Balakot, was training more youngsters there.

Who is Masood Azhar?

There is not much clarity on Azhar's current location. A fews days after the Balakot strike, there were claims on social media—citing local news reports—that Azhar was killed. However, Geo Urdu News had quoted sources to claim he was still alive. The JeM founder, who was proscribed by the United Nations after a decade-long efforts from India, was most recently declared missing by Pakistan. The announcement was made in the recent FATF meeting, where Pakistan continued to be on the grey list.

Azhar is a blue-eyed boy of Pakistan's spy agency ISI which masterminded several audacious attacks on India including the 2001 Parliament strike and the Pulwama carnage that pushed the two countries to the brink of war. A known fugitive, the 50-year-old Azhar, who formed the JeM in 2000, was branded the brain behind various suicide strikes in India and known to have fine-tuned terror tactics which included survey of potential targets before carrying out the attack.

Azhar was arrested in Anantnag in South Kashmir in February 1994 after he had entered into India on a Portuguese passport through Bangladesh. It was a chance arrest. He, along with man named Sajjad Afghani, were travelling in an auto when it was stopped by armymen at Khanabal.

"Both ran from the autorickshaw, prompting the army men to nab them. Army men were happy to find Sajjad Afghani, and had little knowledge about the other," former Director General of Sikkim Police Avinash Mohananey, who interrogated Azhar many times during his two-decade tenure in the Intelligence Bureau, told PTI.

The son of a retired school headmaster from Bhawalpur in Pakistan, Azhar always felt his custody in India was going to be short-lived and that attempts would be made for his release. Attempts were indeed made—the first one within 10 months of his arrest when some foreigners were kidnapped from Delhi and the captors demanded his release. The plot failed when the Uttar Pradesh and Delhi Police managed to get the hostages freed from captivity in Saharanpur.

During that raid on Saharanpur raid, police arrested another militant, Omar Sheikh, who would eventually be released along with Azhar in exchange for the passengers of the 1999 hijacked flight IC814. The Kathmandu-New Delhi plane was hijacked and taken to Kandahar in Afghanistan by Azhar's men.

Another attempt to release him was made by a shadow group of Harkat-ul-Ansar, Al-Faran, which demanded his release in exchange of five foreigners kidnapped in Kashmir in July 1995.

A tunnel was dug in Kot Balwal jail in 1999 for his escape but Azhar could not move out because of his unusual body structure—he was overweight and had large belly that was too big to be squeezed through the tunnel. However, in the process, Sajjad Afghani was killed.

Finally, he was released by the BJP-led NDA government in 1999, along with Omar Sheikh and Mushtaq Ahmed Zargar alias 'Latram', in exchange of the passengers of the hijacked flight IC-814. After the negotiations with hijackers failed, the government succumbed to their demands and the then external affairs minister Jaswant Singh took the three terrorists to Kandahar in a special plane to ensure the safe release of passengers of the hijacked plane. Thus began a new chapter of terror in Jammu and Kashmir as well as rest of India.

After the release of Azhar by India on December 31, 1999, his newly acquired stature in jihadi circles in Pakistan came in handy for the ISI who convinced clerics at the Binori mosque in Karachi to accept Azhar's leadership and thus, on January 31, 2000, the JeM was born.

JeM announced its arrival in the Kashmir Valley in 2000 by carrying out a suicide car bombing attack at the gate of Badamibagh cantonment in Srinagar, the headquarters of the Army's 15 Corps. Two armymen were killed in the attack.

Later, it was involved in the attack on Parliament, the Pathankot air force base, army camps in Jammu and Uri, and the suicide attack on CRPF in Pulwama.

The effort to proscribe him bore fruit after long struggle for India in the United Nations. India first moved the security council in 2009, after the 26/11 attacks. China, a permanent member, however, remained a major obstacle, as it vetoed the move time and again. This time, after the Pulwama attacks, however, the narrative changed, with France, backed by the UK and the US, themselves putting forth the proposal, instead of India. Apart from China, all other members were in favour of blacklisting him. China stood out "like a sore thumb" as one official said. It cited some technical issue to defend its decision. The technical review, however, came up and China, too, fell in line.