Venkatesh is preparing an artwork on A3 size paper 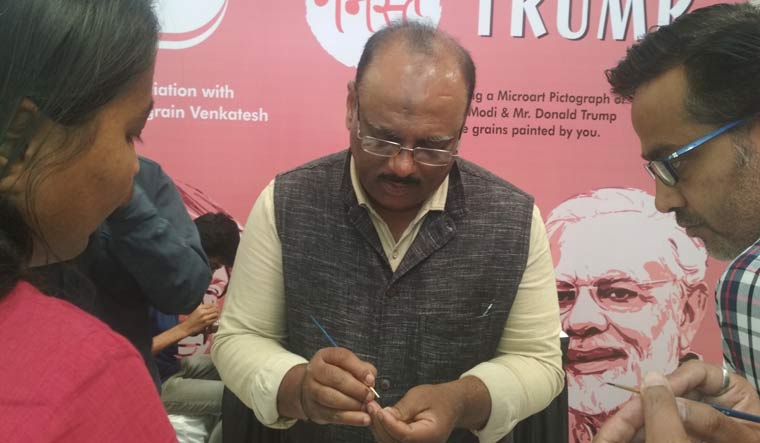 US President Donald Trump, who comes to India on a two-day visit on Monday, will receive many gifts. But rice grain artist Venkatesh Shyanuvhog wants to gift the US President something different.

In an initiative with Ahmedabad One Mall, Venkatesh is preparing an artwork on A3 size paper. It will consist of 5,000 rice grains on the sketch of Prime Minister Narendra Modi and Trump.

“Such an artwork has not been prepared for any leader so far. So I thought of presenting this to the US President,” he said, while showing the fine art of writing on the grain to the visitors.

“It is all about people's participation. The art form helps in developing concentration and in corporate houses it helps in team building,” he pointed out.

The artist said they wanted to give the artwork to Trump in persons. However, if this does not happen, they will send it through the US envoy in India. “We have written letters to the US team,” he said.

A coffee trader, Venkatesh took to writing on the rice grain as a passion. He has been doing it for several years now, and can write 578 characters on a single piece of rice grain. “If I were to do this artwork alone, I would have taken about 15 to 20 days. But with people's participation it will be done in two days,” he remarked.

Hitesh Mori, a visitor, wrote his name on the grain. People have written India, US, Modi, their own names and the names of their loved ones on the rice grains.

Venkatesh is helped in his initiative by 16-year-old Vaivaswat Tandula. He took to writing on the rice grain at the age of five. “It was out of curiosity,” said Tandula, who can write 200 characters on a rice grain.

On Monday, Modi and Trump are to address a massive gathering of over one lakh people at Motera Cricket Stadium, which now is the world's largest cricket stadium, surpassing the seating capacity of Melbourne Cricket Ground.