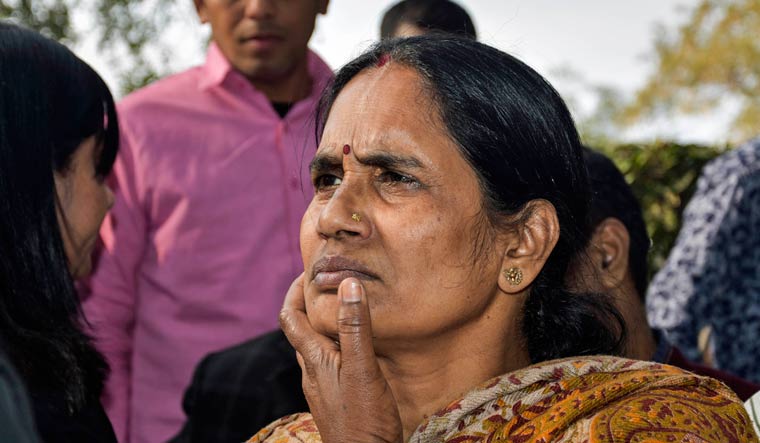 Asha Devi, the mother of a 23-year-old physiotherapy student who was gang-raped and murdered in 2012, broke down and cried in a trial court in Delhi on Wednesday.

Asha Devi and her husband, along with the Delhi government, had moved the trial court in the Patiala House Court complex on Tuesday to seek new death warrants for the four men sentenced to death in the case, popularly referred to as the Nirbhaya case. The executions of the four men had been stayed by the trial court since January 31.

The mother of Nirbhaya got emotional after the court offered to provide legal aid to Pawan Gupta, one of the four convicts,who claimed he did not have a lawyer. Pawan is the only convict among the four who has not filed a curative petition or mercy plea, so far.

Judge Dharmender Rana expressed displeasure over delay from Pawan's side who said he has removed his earlier lawyer and will need time to engage a new one. The Delhi Legal Services Authority provided a list of empanelled advocates to Pawan's father to chose a counsel from. The court noted any condemned convict is entitled for legal aid till his last breath.

Asha Devi was quoted by ANI as telling the court “What about my rights? I am standing with folded hands. Please issue death warrant. I am also human. It’s been more than seven years." After breaking down in the court, Asha Devi went out. She told mediapersons, “I am losing faith and hope now. Court must understand the delaying tactics of the convicts. Now, if a new lawyer is provided to convict Pawan, he/she will take their own time to go through case files.”

Accusing the convicts of using delaying tactics, Asha Devi wondered why the court was not able to understand the ploy of the convicts. The court later adjourned hearing in the case to Thursday.

The application was moved by the parents of Nirbhaya after the Supreme Court on Tuesday granted liberty to the authorities to approach the trial court for issuance of fresh date for the execution of the convicts.

The Tihar jail authorities also filed a status report on Tuesday before the trial court stating that no legal option was preferred by any convicts—Mukesh Kumar Singh (32), Pawan Gupta (25), Vinay Kumar Sharma (26) and Akshay Kumar (31)—in last seven-day period granted by the Delhi High Court.