Devil's advocate: How A.P. Singh made every effort to save Nirbhaya convicts 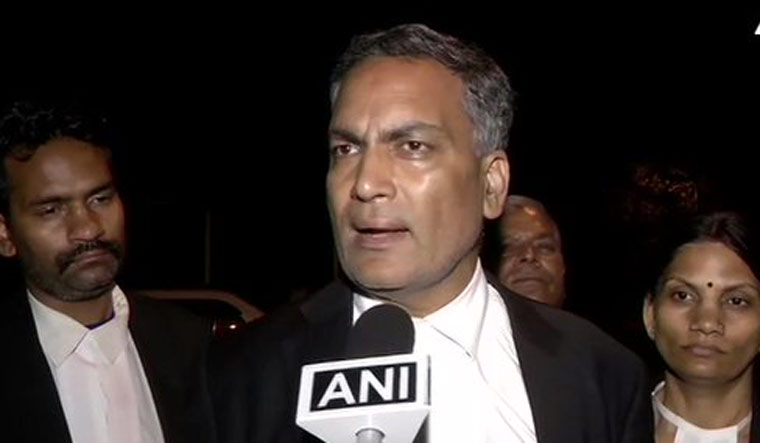 Advocate A.P. Singh is not a popular man in the country. He was barely known beyond his immediate work circle before he took on as counsel for three of the four convicts in the December 16, 2012 gang rape murder case. Ever since, this devil's advocate has been hated, vilified and openly abused.

Many of Singh's tactics were downright dirty, like his repeated attempts at tarnishing the character of the victim. However, Singh played an important role in this case, even though his was a losing battle from the beginning. However heinous a crime, for it to receive the punishment it deserves, the criminal needs to be defended in court. And Singh did that. It might have brought him publicity, but it was no easy task either.

It is a heavy day for Singh, who lost the battle to save the necks of the convicts. There's a sense of failure, mingled with a sense of having done his best, too. Singh tried every tactic, from raising issues of the attacks on his clients in jail, to smartly using loopholes in the legal system to stagger the clemency pleas of his clients, in order to stretch the date of execution as far as possible. In fact on March 2, when he sent the mercy plea of Pawan Gupta to the President of India, High Court judge Dharmender Rana rapped him finally.  Since day 1, whenever people were trying to put you [Singh] in the dock, I was never with them. You were discharging your duty....'' However, since Singh had delayed filing the mercy plea till the eleventh hour, the judge noted that “one wrong move by anybody... you know the consequences?” Singh prevailed that day, as the judge called off the hanging for March 3.

Even after that, knowing that every legal recourse was over, Singh resorted to literally shots in the dark—dispatching petitions to the International Court of Justice and the National Human Rights Commission. On Thursday, the eve of the hanging, he took late night pleas to both the Delhi High Court and the Supreme Court, which were dismissed within minutes. “I did my job to the best of my ability,'' he told this correspondent, adding that the Supreme court also lauded his efforts at the eleventh hour on Thursday, even though the case was dismissed.

Singh believes that the media focus on this case scuttled any chance of mitigating the sentences. “These boys saw around them criminals getting their sentences commuted. Surendra Koli's death sentence in the Nithari case was commuted (for the murder of Rimpa Halder. The sentence was commuted because there was inordinate delay of more than three years after rejection of mercy plea by president). They believed that this was their only crime, there might be some mercy, somewhere. But the media pressure ensured that this would not happen. I guess the media was also doing its job.''

Singh is impervious to the criticism that has come his way for the methods he used. He quotes a couplet by Kabir: Nindak nyare rakhiye, aangan kuti chavaya ... (keep your critics close by, if possible give them a home in your front yard). “Critics keep you grounded, they also spur you on,'' he says.

In his close association with the killers over the last seven years, he saw their misery, fear and anxiety. Vinay Sharma was the most remorseful and he focussed his energies into art. “That man needed only a scrap of paper and a stub of a pencil and he would begin sketching. He made portraits of many of the jail officials. He painted, and he sketched,'' recalls Singh.

Pawan Gupta was a quiet person. He was extremely disturbed that the authorities did not accept he was a juvenile at the time of the incident. In fact, till the end, his father kept trying to get him off the noose on this ground.

Akshay Thakur, with a wife and young child and elderly parents back home in Bihar, was worried as much for himself as for the family.  “He slogged in jail, taking up many tasks, from grinding flour to tailoring. Every once in a while, he would send a few thousand rupees back home. He earned around Rs 80,000 in jail,'' says Singh. Only Mukesh was more impoverished than Thakur. He had already lost his brother and co accused Ram Singh, who died while in custody in 2013. His father also died recently. He leaves behind a helpless mother, who has been living on the charity of her neighbours. “Mukesh was different. He refused to take up any job in jail.''