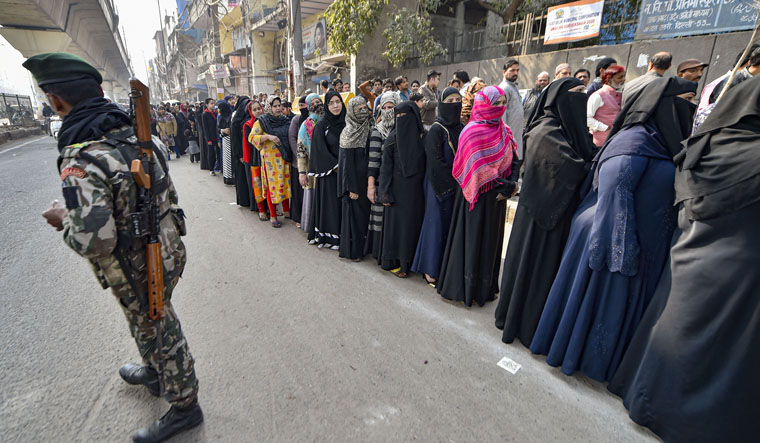 Three minority-dominated seats of Mustafabad, Matia Mahal and Seelampur recorded the highest voter turnout in the Delhi Assembly elections on Saturday. According to the data provided by the Election Commission of India, Mustafabad in northeast Delhi recorded 66.29 per cent voter turnout till 5pm, while Matia Mahal in Old Delhi, the area that saw anti-Citizenship (Amendment) Act protests, recorded a voter turnout of 65.62 per cent. Seelampur, another minority-dominated seat in northeast Delhi, recorded 64.92 per cent voting. The seats had also seen anti-CAA protests in December.

In a city where Muslim voters constitute 13 per cent of the electorate and are scattered through Ballimaran, Matia Mahal, Mustafabad, Okhla, Babarpur and Seelampur and other localities, the Citizenship Amendment Act (CAA) and the National Register of Citizens (NRC) have emerged main issues alongside everyday development issues.

In constituencies like Seelampur, which is contested between Congress’ Mateen Ahmed, AAP's Abdul Rehman (the party dropped the sitting MLA and went for a new face) and BJP's Kaushal Mishra, key issues like the CAA had found major political resonance. The region has already witnessed violent protests over the issue.

This raises the question. How much have issues like the CAA and NRC influenced the Delhi polls?

PM Modi had directly pitted the BJP against the anti-CAA protesters on multiple occasions. "Be it Seelampur, Jamia (Nagar) or Shaheen Bagh, for the last several days, there have been protests over the Citizenship (Amendment) Act. Are these protests coincidental. No, this is not coincidental, it is an experiment," Modi had said during the campaign. Behind the protests, Modi added, is a political design aimed at harming national harmony. In Okhla's Shaheen Bagh, hundreds of people, including women and children, have been protesting since December 15 at Shaheen Bagh against the CAA and the NRC.

Long queues were seen outside polling stations in areas like Jaffrabad, Jamia Nagar, Turkman Gate and Shaheen Bagh which have been witnessing protests against the CAA. At the Shaheen Bagh protest site, women voted in batches. Mehzabeen Qureshi, who returned to the protest site after voting, told PTI, "I stayed at home to let other women in the house go out and vote. Now I have joined them here at Shaheen Bagh after voting. I voted today to secure democracy." Delhi recorded 61.46 per cent voter turnout on Saturday, down from 67.47 per cent in 2015 assembly election, with exit polls predicting an easy win for AAP, which sought to retain power on development plank, against the BJP that ran an aggressive campaign centred around the issues of anti-CAA protests and nationalism.

Most of the exit polls on Saturday predicted a clean sweep for Arvind Kejriwal's AAP, while the BJP is predicted to be a distant second. Votes will be counted on February 11.

What were the issues Delhi voted on

As multiple opinion surveys emerged, it was clear that local issues, like electricity and water supply, jobs and development work, in tandem with national security and CAA were among the key factors on Delhiites' minds.

For Prahlad Kumar, a first-time voter from Nangloi, employment was the topmost on the agenda. "Rest everything is secondary. Light, water... whatever amenities, even if they are expensive they can be bought if there is income," he said.

In Kalkaji constituency, S.C. Sharma (74) said he voted for development and national security. Amarinder Biji (50), a voter in New Delhi seat, said he would not vote for development if it comes "at the cost of sanity and safety". "It has become so scary that there can be firing anytime any day. I don't want forces which divide the country and do not have love for the nation," Biji said.

Saurabh Kumar (23), a bus conductor, said he voted keeping in view national interest. "Free water and power are fine, but there are much bigger national issues that are important," he said outside a polling station in Karawal Nagar.

The Citizenship Amendment Act (CAA) and National Register of Citizens had emerged the the key issues, especially in minority dominated areas. Mohammad Zubair (63) from Okhla, who came to vote along with his 26-year-old daughter Sarah Madiha, an architect, said he will choose development.

"Attempts were made to polarise voters by a party over the anti-CAA protests, but it will not work much," he said. Bharatnatyam dancer Aranyani Bhargav patiently waited in a queue for her turn to vote, occasionally cradling her nine-month-old child whom she carried strapped to herself.

The 34-year-old artistic director, accompanied by her parents Rajeev Bhargav and Tani Bhargav, said she chose development over nationalism. "I voted for development of Delhi, harmony and peace.... I am against people pitching one community against another," she said. Shahabuddin and his wife Fahmeeda, in their early 70s,  said they voted for the party that worked for poor.

"The governments need to help poor people and we voted for the party which is doing it," said Shahbuddin, a roadside vendor in Khahuri area of Karawal Nagar constituency.

The BJP had pitched the issue of nationalism and opposition to anti-Citizenship (Amendment) Act protests, especially in Shaheen Bagh, at the centre of its aggressive electioneering, while the AAP mostly avoided getting into a debate over national issues and ran its campaign around development plank and populist schemes like free power, water and bus ride for women. The Congress remained on the sidelines, reminding the people of the development in the city under Sheila Dikshit government.

Though BJP had vociferously raised anti-CAA protests at Shaheen Bagh, voters in south Delhi were divided on whether it will have any bearing on the outcome of the polls.

Syed Asif, 30, a trained engineer, who runs a business near the site of the protest that has been going on for over 50 days now, lamented that Shaheen Bagh agitation was about a "human issue" but "made into a poll issue to serve selfish interests". "Thus, it surely polarised minds of people, and that will have an impact on the outcome of the polls. But, Delhi also has very sensible people, and I an very hopeful that most of the people have voted or will vote wisely," he said, as he stood in a long queue at a polling station in Shaheen Bagh thronged by voters till late afternoon.

Looking to capture power after a gap of 22 years, the BJP had launched a campaign blitzkrieg, with Union Home Minister Amit Shah leading the saffron charge fuelled by its planks of Hindutva and nationalism. The issue often dominated the political discourse during the campaign, with many BJP leaders targeting the ruling AAP and Congress, accusing them of "misleading the people" holding anti-CAA protests in Delhi.

Though the Shaheen Bagh protest site is far away from Kalkaji, a section of voters in the constituency also felt that the anti-CAA protests would "have a bearing" on the elections that concluded Saturday evening.

Amit Lal, 18, who mans a shop at Kalkaji Mandir, voted for the first time. He said the Shaheen Bagh issue will "have an impact" but development agenda also cannot be ignored. "I live in a JJ Colony in Madanpur Khadar that neighbours the protest site, and the anti-CAA protests were made a major poll issue by parties. But, agenda should have been development, education and health and jobs."

What could be the issues for a Muslim voter?

"Pakistan, Hindu-Muslim divide have been the focal point of this election. I have never seen such a polarised election," 68-year-old Imtiaz Hussain, who was born in Old Delhi and has been living in the Okhla area for the last 15 years, told PTI.  "Non-issues have been made issues," he said, pointing to a poster declaring "No-CAA, No-NRC, No-NPR". In his view, these should not be electoral issues at all. Hussain is clear he will consider the Citizenship (Amendment) Act, the National Register of Citizens and the National Population Register along with issues such as water, electricity and sanitation when he votes on Saturday.

Caught between bread and butter issues and the CAA-NRC-NPR that they feel threaten their identity as Indians, many other Muslims across the city agree with Hussain.

The Aam Aadmi Party, which is pitching for a second term in power, has rolled out several free schemes and has promised to continue them if it comes to power.

But Abrar Ahmed, 32, a businessman in northeast Delhi's Seelampur locality, isn't sure if it will work for his community. "If we are not citizens of this country, what will be the use of free electricity, water and wi-fi? We want this Act to be revoked," Ahmed said. However, potable water is a major issue in his area, he added.

"I was suffering from cancer and completed my chemotherapy three months ago. The doctors told me to drink only packaged water for at least three months," Ahmed said.

He is also unhappy that the AAP did not take any stand against CAA-NRC, Article 370 and triple talaq.

According to Muhammad Javed, 50, who owns a printing press in Ballimaran in old Delhi, the polarising campaign could reap some electoral dividends but it would be limited at best. "The common man wants to earn a decent living and live his life without bothering anyone. They have never, and they will never, root for fights between Hindus and Muslims. "Their demands are simple: better government schools, cheap electricity, safe water and affordable health facilities. Whichever party gives them this will get the votes, and I believe that AAP has done reasonably good on these count and hence would win the elections," said Javed.