Coronavirus: Air India jet on standby to fly to Wuhan; 3 under observation in Delhi 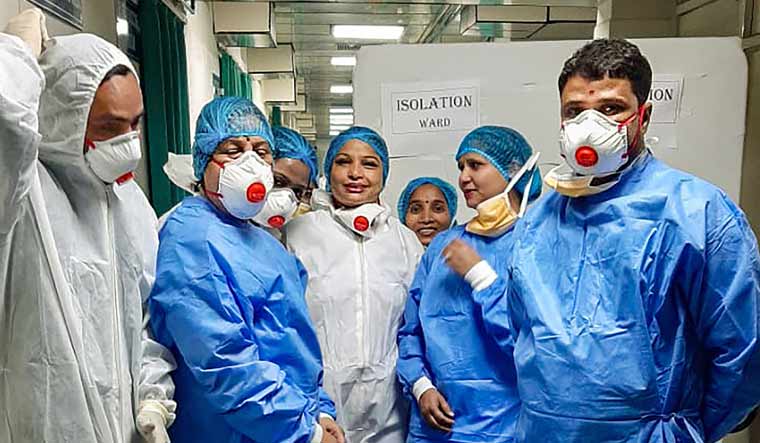 Personnel of RML Hospital in Delhi in protective gear | PTI

Flag carrier Air India has kept one of its 423-seater Boeing 747 'jumbo jets' ready in Mumbai for the evacuation of Indian citizens from Wuhan province in China in the wake of Coronavirus outbreak in the East Asian country, an official source said on Tuesday.

The airline is awaiting necessary approvals from the ministries of external affairs and health to operate the special evacuation flight, the source said.

The decision follows the government instructions to various ministries to take steps to deal with the issue.

"We have kept a Boeing 747-400 ready in Mumbai to operate an evacuation flight to China whenever we get a go-ahead from the government," the source said.

Some 250 Indians are to be evacuated, the source said, adding, "We are awaiting clearances from ministry of external affairs and also from health ministry. The health ministry's nod is required because the operating crew has to fly in a virus outbreak territory."

At the cabinet secretary meeting on Monday,the government decided that steps may be taken to prepare for the possible evacuation of Indian nationals in Wuhan.

Coronavirus is a large family of viruses that causes illnesses ranging from the common cold to acute respiratory syndromes, but the virus in China is a novel strain that has not been seen before.

The outbreak has caused alarm because of its similarity to SARS (Severe Acute Respiratory Syndrome).

Accordingly, the ministry of external affairs will make a request to the Chinese authorities while the ministry of civil aviation and ministry of health will make arrangements for transport and quarantine facilities, respectively, an official release had said on Monday.

The government also asked the civil aviation ministry to issue instruction to airlines for managing and notifying anybody reporting illness on all direct and indirect flight to China besides facilitating in-flight announcements and distribution of health cards to all flights with direct or indirect connectivity to China.

Officials said ministry of external affairs will make a request to the Chinese authorities for evacuation of Indian nationals, mostly students, stuck in Wuhan city.

"It was decided that steps may be taken to prepare for possible evacuation of Indian nationals in Wuhan. Accordingly, ministry of external Affairs will make a request to the Chinese authorities," a government statement said.

Wuhan and 12 other cities have been completely sealed by the Chinese authorities to stop the virus from spreading. The death toll climbed to 80 with 2,744 confirmed cases.

Over 250 to 300 Indian students are reportedly stuck in Wuhan, triggering concerns over their well-being.

3 under observation in Delhi

Three persons have been kept under observation at an isolation ward of RML Hospital in Delhi for a possible exposure to novel coronavirus, officials said on Tuesday.

The three—all men aged between 24 and 48—were admitted on Monday and their samples have been sent for testing, Dr Minakshi Bhardwaj, medical superintendent of RML Hospital, said. According to a report, the trio had returned from China.

While two of the men are residents of Delhi, one hails from the NCR.

Till Monday, a total of 33,552 passengers arriving in India from China in 155 flights have been screened.